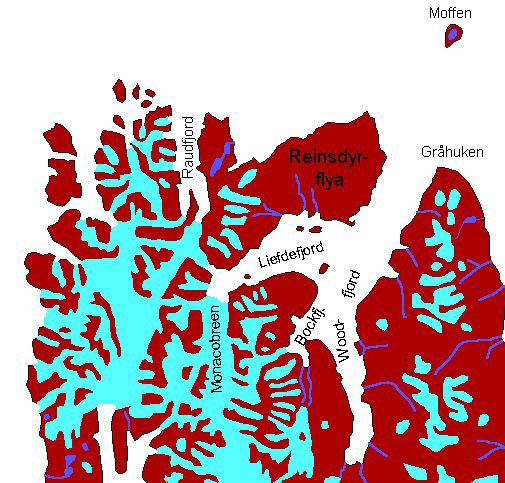 General: Beautiful and varied fjord-area at Spitsbergen’s north coast. The area is usually accessible quite early in the summer, as it is still under the influence of the gulf stream, but fjord ice can block the fjords or at least the coast in places for another while. The larger part of the area (Raudfjord, Liefdefjord) is part of the Northwest Spitsbergen National Park.

Geology: Varied. There are basement gneisses, marbles etc. in many areas around Raud- and Liefdefjord. There are also places there with remnants of the filling of the Devonian Andrée-Land-Grabens with its partly brownish-red sandstones, conglomerates etc. (‘Old Red‘). 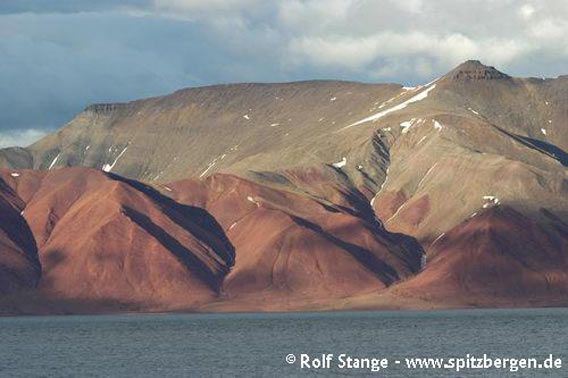 These sediments have been strongly deformed by compressive tectonices probably during several stages: Svalbardian phase in the uppermost Devonian and during the Alpidic orogeny in the lower Tertiary, their total thickness exceeds 7-8 km, they are not metamorphed. The colour varies and is partly grey to black and partly beautifully red, which is due to iron oxides from weathering in a sub-tropical climate when these sediments were deposited: back then, in the Devonian, more than 350 million years ago, Spitsbergen as part of a larger plate was just south of the equator. The Raudfjord has got its name (‘Red fjord’) from an occurrence of Old Red sediments on its eastern side, although it is not as striking as the name may suggests. There are very colourful areas in the Liefdefjord/Woodfjord area: Reinsdyrflya and the islands on its southern side (Andøyane) and most of the eastern side of Woodfjord and Bockfjord. In the Bockfjord, there is another interesting geological feature: the only Quaternary volcanoes of Spitsbergen are there. Sverrefjellet is the ruin of a volcano which may have erupted a few 10 000 years ago, and there are some warm springs in the area. 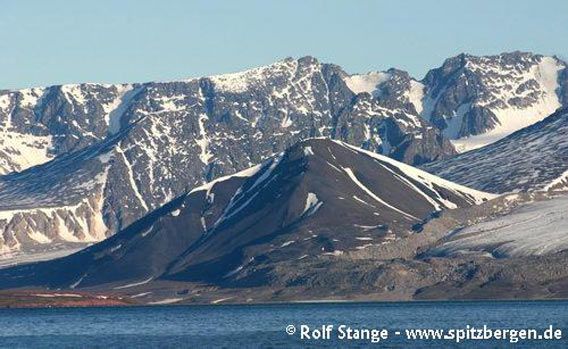 Landscape: Due to the geological mosaic, the landscape is very varied. In Old Red area, the mostly soft sandstones give the landscape round shapes and warm colours. Here, especially in Andrée Land east of the Woodfjord, there only few and small glaciers, as the average elevation is lower and the area is in the rain shadow of the mountains near the west coast. 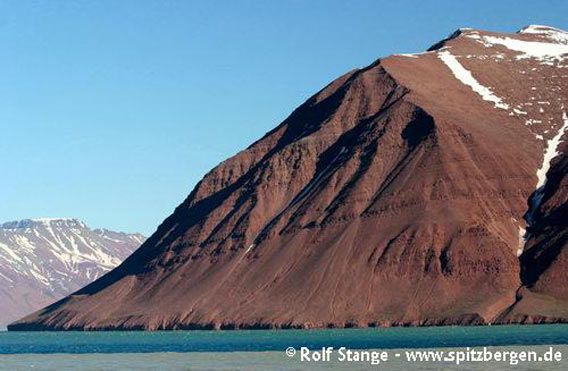 Old Red in the Bockfjord with its beautiful, red colours Farben.

Basement rocks south and west of the Liefdefjord feature a landscape with higher, jagged mountains and strong glaciation, which culminates in the large calving front of the Monacobreen. 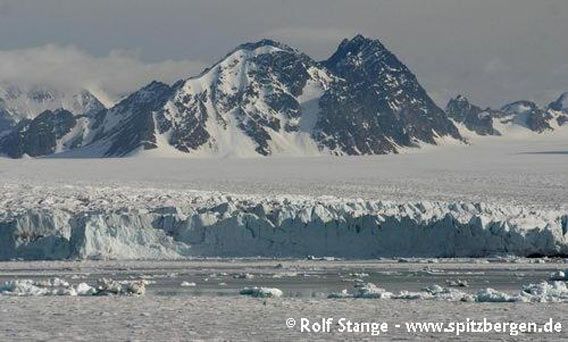 The glacier Monacobreen and surrounding landscape with alpine mountains in the inner Liefdefjord.

Flora and Fauna: Rich. Because of the influence of the gulf stream, the climate is relatively favourable and there are beautiful tundra areas, the colours of which are even enhanced by the reddish soil in the Old Red areas. These are quite productive also because weathering products of the soft sandstones can create something remotely similar to soil. Here, you can find Mountain avens, Purple saxifrage and other saxifrages such as the Spider plant, which is otherwise quite rare. Also faunistically, there is a lot to be seen in the area such as large numbers of breeding Arctic terns and Common Eider, occasionally even a King Eider. This means that early in the season, one has to be extremely careful in order not to disturb any breeding birds. There are usually huge numbers of Arctic terns and Kittywakes attracted to the front of the Monacoglacier by upwelling meltwater which seems to bring some tasty goodies to the surface. 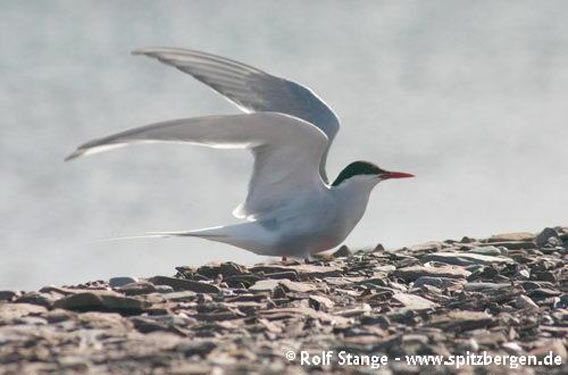 History: The area was regularly visited by whalers in the 17th century, even though no remains of land stations are known. Trappers have often used the area in the late 19th and 20th century; a tradition that has been kept alive until today on a small scale outside the national park. 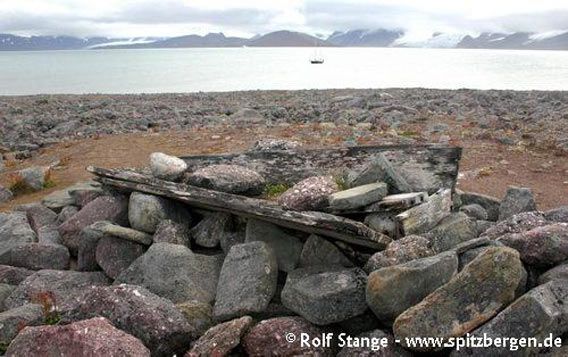 In 1934-35, Christiane Ritter wintered together with her husband Hermann Ritter and the Norwegian hunter Karl Nikolaisen in the hut just south of Gråhuken (click here to see panorama images of the famous “Ritter hut” at Gråhuken). She wrote a book about this experience that became famous: “A woman in the polar night”.

The hut was actually built in 1928 by the famous trapper Hilmar Nøis. 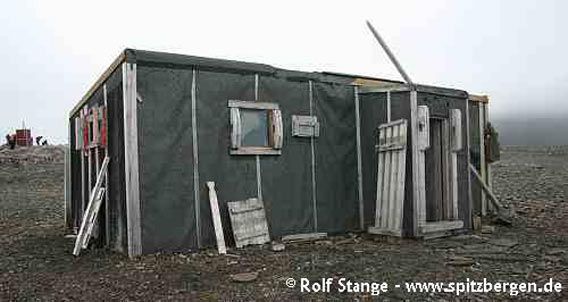