2017: my year in review – February and March: the Antarctic Odyssey

After finishing the big project with my new Norwegian guidebook Svalbard – Norge nærmest Nordpolen, it was time to get some fresh air. And I got lots of it during a trip around the world in February in March. The heart of this huge voyage was a semi-circumnavigation of Antarctica, which I refer to as the “Antarctic Odyssey”. Starting in New Zealand, we went to Campbell Island, into the Ross Sea and then via Peter I Island to the Antarctic Peninsula before we finished in Ushuaia. Truly an Odyssey!

The highlight of this great journey? Hard to say. There was not only one highlight. Just the dimensions of this trip are epic, many thousand nautical miles in more than 30 days. Being Expedition Leader on such a trip on the Ortelius was certainly a contribution towards making it interesting for me. Normally, “my” ships are much smaller these days, and they do not carry 3 helicopters!

Thinking about which impression still means a lot to me and will stay for a long time, then Campbell Island is quickly coming to my mind. This island, which belongs to the New Zealand subantarctic islands, was very high on my personal wishlist – simply as I had not been there before. Well, I had been very close 2 years earlier, but then, there was no chance of making a landing because of very strong winds. This time, we had just the portion of luck that you need in a place like that. 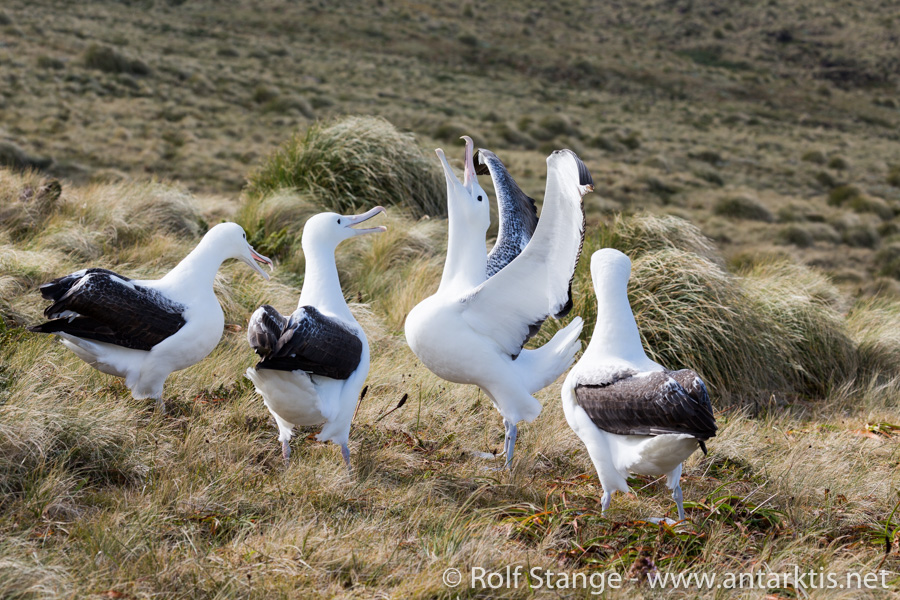 Of course, flying into Taylor Valley, one of the famous McMurdo Dry Valleys, and to McMurdo Base, where we almost stayed quite a bit longer than we actually wanted to, are experiences never to be forgotten. And that is generally true for all impressions of Antarctica from a bird’s perspective. 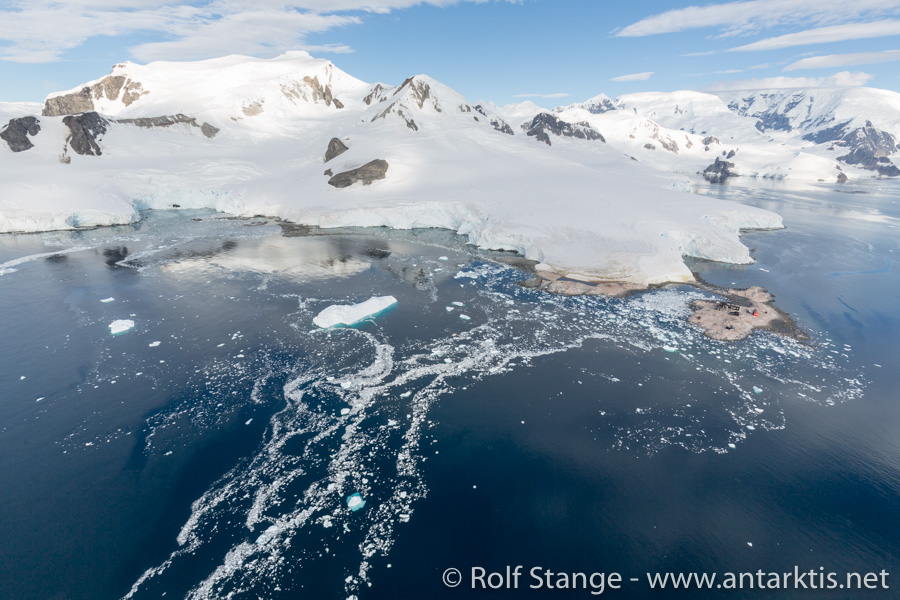 But in the end, it is the direct encounters with the wildlife and the scenery that is always getting very close to my heart and soul. That is what stays! The Albatrosses on Campbell Island, the Emperor penguins in the Ross Sea, the Humpback whales and penguins in the Antarctic peninsula, to mention a few of these encounters. Memories that will stay forever! 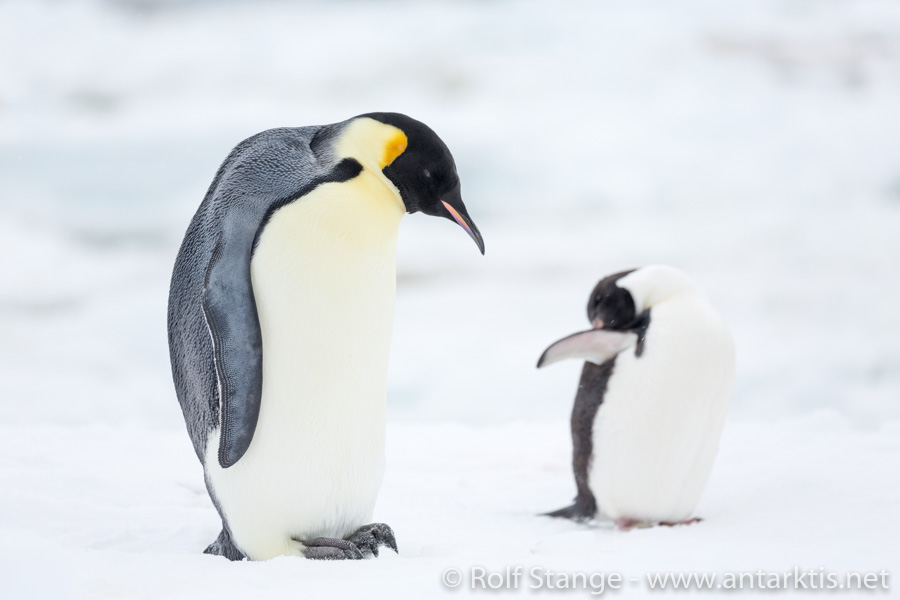 Emperor and Adelie penguin at Cape Hallet in the Ross Sea.

It is almost frightening how time is flying. Again, a year almost gone! It was an intense, rich year. What did the last 12 months bring, for Spitsbergen, for spitsbergen-svalbard.com and for me? I’ll review the year with a couple of blogs over the next days.

January is polar night in the far north. A good time for writing table adventures. Writing arctic books is not boring, but the actual process is often not terribly exciting. In practice, it means to spend an awful lot of time on the computer. Researching, writing, editing, looking for images, processing images, making illustrations and so on and so forth.

In January 2017, my biggest project in many years was about to be finished. I can tell you that it was not boring! For a long time already, I had had dreams of a Norwegian translation of my Spitsbergen guidebook. And in 2015, I was brave or crazy enough to go ahead with it. Intense work on every opportunity for a good year, involving a number of native speakers who helped me in translating and “språkvask” (proofreading language). I am still almost feeling dizzy when I bring these weeks and months, which were very intense, back to my inner eye. I don’t want to bother you with the details of the process, but it was without exaggeration certainly my biggest project since the very first version of the Spitsbergen guidebook came out in 2007 (that was the first German edition, that very heavy book, if anyone remembers). And at the same time, I had a little series of presentations, while public attention in Longyearbyen was turned on a polar bear family who had settled down for a while in the neighbourhood of town. A polar bear family, mother with 2 cubs, even walked through way 238 (the neighbourhood close to Adventdalen, lowermost road – that’s where we also have our little home).

And I did manage to finalize the files with the Norwegian book for printing before I went down to Antarctic in February. Halleluja! 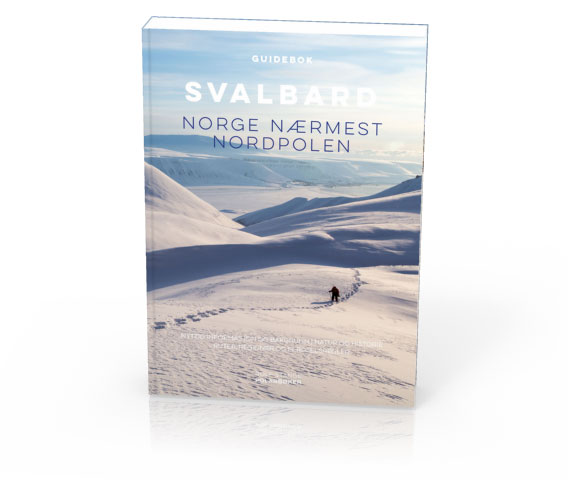 More evacuations on the anniversary of the 2015 avalanche in Longyearbyen 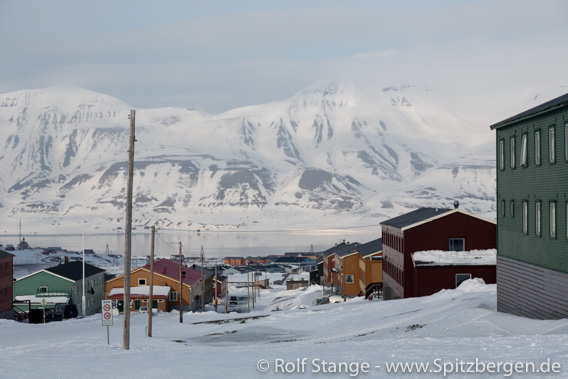 Soon it will be two years ago that the avalanche came down from the mountain Sukkertoppen that destroyed eleven houses and took two lives. There will be a memorial ceremony in Longyearbyen on the day, 19 December.

The avalanche area in Longyearbyen in December 2015. Two people were killed and eleven houses destroyed. One was moved as much as 80 metres. Photo © Svalbardposten. 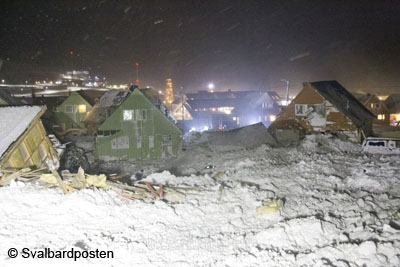 There has been – and still is – a lot of talking about the avalanche risk in Longyearbyen on all levels. It seems obvious that there have been neglects on various public levels, but it was said officially that there is no institution or individual that may legally be held responsible.

And there is, of course, the question of how to deal with the avalanche risk in future. An official report about the avalanche situation has determined that a large number of houses in Longyearbyen is exposed to various levels of avalanche risk. A local warning system has been established, which has produced mixed results so far; on one occasion, the system produced a false security statement that was spectacularly wrong. Two houses were destroyed on that occasion, and it was a matter of luck that there was no loss of human life. Instruments to measure the thickness of the snow layer have been installed on various slopes close to Longyearbyen. These instruments are supposed to provide real-time data about snow accumulation in locations where people had to measure manually in the past, something that is often difficult or even impossible in situations of severe weather when an increased risk has to be assumed. But that is obviously exactly when you need that kind of data, so these new decives are expect to make a significant improvement to the avalanche warning system.

Avalanche barriers are another measure expected in the future, but they are not there yet, almost two years after the big, tragic 2015 event. Evacuating parts of Longyearbyen, on a situative or permanent basis, is also one of the options which are discussed. The financial aspects of all that is yet another issue.

It does, however, not cost the public much to evacuate certain addresses on a preventive basis. Evacuating parts of Longyearbyen has become a standard procedure during winters since late 2015. Yesterday (14 December), the Sysselmannen has issued an order that certain addresses have to be left until 22 December until further notice. This measure is expected to be in force until the snow is gone, which means, the houses will not be available for months. 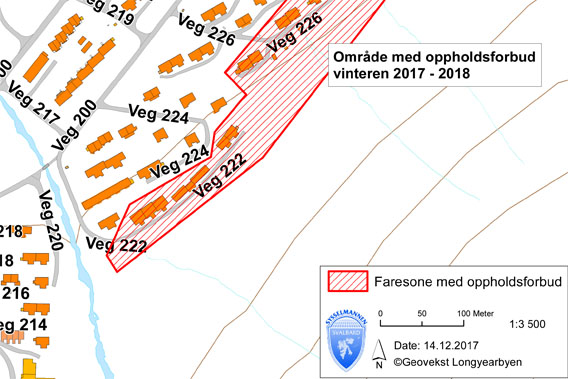 These parts of Longyearbyen (marked red) will be evacuated from 22 December until further notice. The complete map is available from the Sysselmannen.

So far, evacuations were made in or before an actual risk situation, based on snow conditions, weather forecasts etc. This time, however, there is no such base for the evacuation, something that becomes clear from the time span of 8 days between the issue of the evacuation order and the date (22 Dec) when it actually enters force. Sysselmannen Kjerstin Askholt says “The ban on traffic is based on the risk evaluation for individuals and public safety, because this area is especially exposed to avalanches. The current practice with a local avalanche warning system and possible evacuations, based on technical advice from avalanche experts, does not exclude a high residual risk and remaining uncertainties, so the houses in question can not be used while there are no measures for avalanche safety in place” (Sysselmannen, auhtor’s translation).

Areas concerned are addresses in way 222 and 226, which are located directly next to the mountain Sukkertoppen, but may be extended to other areas at any time as deemed necessary by authorities.

Evacuating a number of houses for a longer period of time based on general precautionary reasons rather than an actual risk situation appears to be a drastic step, compared to the impact that this has on the lives of those who have to leave their homes for months. There are those who have, next to their home in the area concerned, rented a place elsewhere in Longyearbyen on a permanent basis, something that obviously involves high costs and this is not a contribution to the already difficult housing market in Longyearbyen either. Those who own a place in the area that is affected, are also faced with a substantially difficult situation.

Not a glorious chapter for politics, considering the current development started with the avalance in December 2015 – two years ago.