5. The basalts of the Blosseville Coast 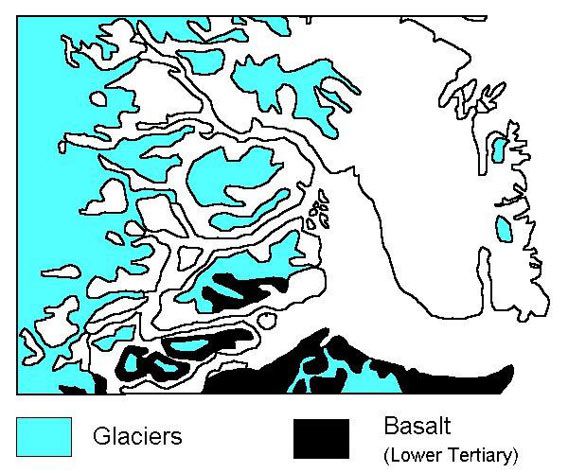 Welded together during the Caledonian orogeny, several continents had remained as one huge land mass during several hundred million years. Finally, the break-up of this large continent was on its way during the later Mesozoic. In the north, it happened between East Greenland and northern Europa (Ireland/Scotland/Scandinavia) in the lower Tertiary, 50-60 million years ago. This process of breaking up (‘rifting’) led to intense volcanism about 55 million years ago, similar to Iceland today. Large volumes of basaltic lava covered wide areas. There are no volcanic mountains with the classical cone-shape visible, as the eruption centres were totally buried under their own products. 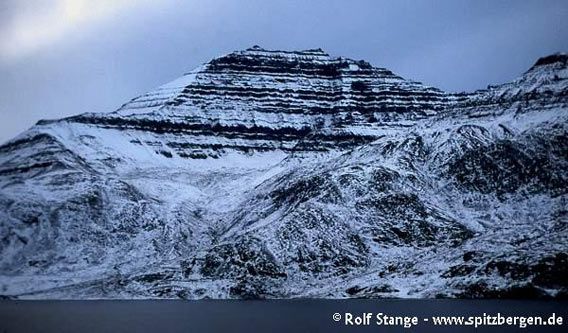 Layers of basaltic lava in eastern Gåseland. The layering is optically even enhanced by the fresh snow and provides a strong contrast to the unlayered metamorphic rocks seen in the lower slope.

During the first stage, the eruption centre was probably somewhere at Gåseland. Large volumes of liquid basaltic lava filled the old valleys to begin with, before they could start to cover the whole area. Then, a single lava flow, being 10-50 m thick, could cover as much as 4000 km2!

The centre of the second stage was near the outer coast of today. Nevertheless, the lava flows which were produced here went as far as 120 km, reaching amongst others Gåseland. During the third stage, everything was covered with basaltic lava flows once again, before a large number of intrusions penetrated both the basalt layers and, to a lesser degree, rocks in other areas in the Scoresbysund such as in Jameson Land.

The difference between the three stages is not immediately evident to the visitor in the field, but it becomes clear to scientists from detailed investigations in the field and in the laboratory, including the chemistry of the lava rocks.

The total thickness of the basalt layers has its maximum near the outer coast and reaches more then 2000, in places even more then 3000 metres. An area of at least 80 000 km2 was covered.

Compared to today’s volcanism on Iceland, the frequency of eruptions 55 million years ago in the area south of the Scoresbysund was a bit less, but the volumes of erupted lava was much larger.

The layers of basaltic lava now form striking landscapes south of the Scoresbysund and in southern Milne- and Gåseland. The single layers, each representing a lava flow, are well visible and lay more or less horizontally. These rocks are quite hard and thus form a high plateau, which is mostly glaciated and now dissected by individual glaciers. The slopes are usually extremely steep, the landscape is quite inaccessible and lives the visitor with an impression of inhospitability. 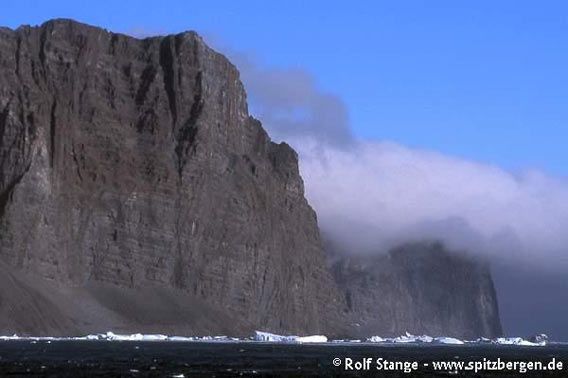 Intense land uplift which happened together with the volcanism in the lower Tertiary is of decisive importance for the appareance of today’s coastline in most parts of Greenland (and Norway). The Caledonian mountains had been eroded since long ago, all there was left was a landscape of low-lying hills. It needed uplift of several 1000 metres to create the spectacular mountain and fjord scenery which we can admire in East Greenland nowadays. This happened during the opening of the north Atlantic. Remains of the old lowlands now form the rolling, mostly glaciated high plateau in the inner Scoresbysund (Milne Land etc.), where it has not yet been completely destroyed by erosion.