The elegant Ivory gull is one of those seabirds we don’t know much about. It is easy to recognize by its pure white plumage. The Ivory gull is usually found in remote places – or on rubbish dumps. 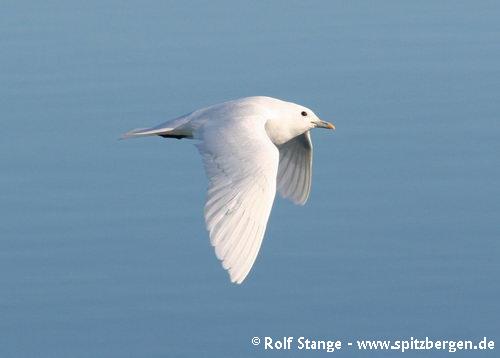 Distribution/Migrations: Ivory gulls breed in certain areas in the high Arctic. In Svalbard, they breed in the high-arctic northeastern and eastern parts of the archipelago (Sjuøyane – Nordaustland – Kong Karls Land). Colonies are small, changing their location after a while and usually situated on steep cliffs, often far inland, within glaciated areas. There are exceptions, as some Ivory gulls breed on flat tundra or smaller mountains near the coast, for eksample on Abeløya, the easternmost island in Kong Karls Land.

Ivory gulls spend their lives mostly in waters with a lot of drift ice. They like to follow ships for a while and are thus regularly seen from ships in areas with drift ice, as well as in the vicinity of settlements, as they find food near rubbish dumps and sewage water outlets. Ivory gulls spend the winter near the ice edge or at sea between southwest Greenland and Labrador. An individual from Spitsbergen has even been found in the Bering Sea.

Biology: Ivory gulls build a simple nest of plant material and lay one or two eggs in late June or early July. Both parents take part in incubation which lasts for about 25 days. The offspring will leave the nest after another seven weeks. They live on a wide selection of food, from small fishes and near-surface zooplancton to leftovers from Polar bear’s meals and seal placenta. Glaucous gulls can be dangerous to eggs and chicks. Polar bears and Arctic foxes will plunder nests on flat ground.

Miscellaneous: The global population was estimated at 14,000 breeding pairs, most of them in the Russian Arctic, but a census in 2006 showed that recent numbers are much smaller, around one third of the original estimate. The reasons for this development are unknown, although the decreasing pack ice cover and environmental toxins are believed to be important factors. Ivory gulls from the Russian arctic were found to have high levels of PCB and DDE in their tissue.

Next to the ice-covered sea, the settlements in Spitsbergen are actually good places to see the ivory gull, as they are often looking for food near places like rubbish dumps, dogyards and sewage water outlets.