The news of the successful landing of the NASA spacecraft “Phoenix” on Mars on 25 May 2008 went around the world. Now, images have been published that show surface structures that resemble frost patterned ground which is common in the Arctic. The stone rings shown in the NASA images are not permafrost structures: their development does not require permafrost, but frequent and strong freezing and thawing. But more importantly, they require water/ice for their formation.
The NASA images. 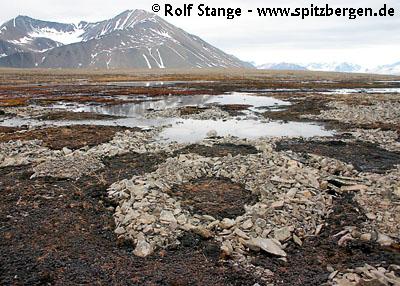 Van Mijenfjord is the shipping route to the Norwegian mining settlement of Sveagruva. It is mostly blocked by the long, narrow island of Akseløya, which increases the local fjord ice development significantly. Recently, Norway’s strongest icebreaker, KV “Svalbard”, had to give up breaking the ice to Sveagruva in a distance of 10-12 kilometres to the settlement. The thickness of the ice was near one metre, and one out of four main engines of the vessel was not working. Following behind KV “Svalbard” was a cargo vessel with supplies and equipment for the mine. These had to be unloaded in Longyearbyen and taken to Sveagruva on the ground with bulldozers and by air.

KV “Svalbard” had already broken a lead through most of the length of the fjord. Because of its unique geography (blocked by the above-mentioned island) and in the light of recent climate changes, the fjord is the only one on the west coast of Spitsbergen where regular local ice formation is likely to occur for some time in the future. Fjord ice is an important habitat for arctic wildlife species such as seals who give birth to their offspring on fjor ice and for Polar bears as hunting ground and so on.

Breaking the ice in Van Mijenfjord regularly is thus criticised by environmental organisations. It is one of the reasons why many are sceptical to the plans of the SNSK (Norwegian mining company) to establish a new coal mine at Lunckefjellet north of Sveagruva. Another reason is the large amount of carbon that is stored in the ground in shape of coal, which would be released to the atmosphere in case of mining and subsequent burning.

SNSK argues that their coal is more environmentally friendly than other coal on the world market due to its low methane content. During mining of one ton in Svea, only 0,9 m3 of methane are released to the atmosphere in contrast to 20-40 m3 as the global average, according to SNSK.

Another argument used against the plans for a new mine is the position very close to the boundaries of the Nordenskiöld Land National Park (partly even inside). Regulations for protected areas in Spitsbergen are very strict.