Nature, history and photos from one of Spitsbergen's most beautiful areas 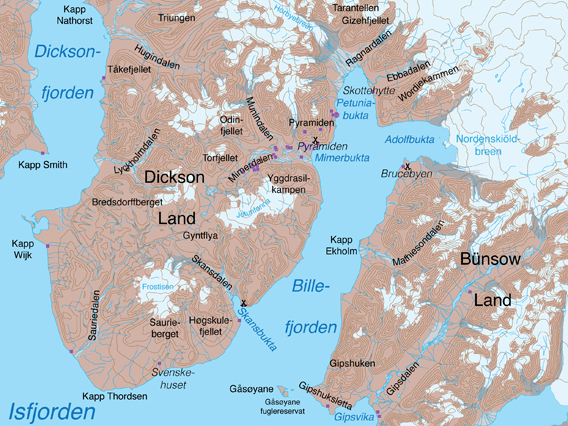 Dickson Land is the name for the peninsula between Dicksonfjord and Billefjord. It is named after Oscar Dickson (1823-1897), a Swedish industrial who sponsored several polar expeditions. Billefjord is very scenic, including the large calving glacier front of Nordenskiöldbreen, and it has the former Russian mining settlement Pyramiden. Because of this and the relatively good accessibility due to the short distance to Longearbyen, it is frequently visited especially in the summer, when boats offer day trips from Longyearbyen, but also in the spring (late winter). Additionally, Dickson Land is one of the most beautiful and easily accessible hiking and trekking areas of Spitsbergen. Long trekkings following the large, ice-free valleys and high plateaux are possible as well as some mountain climbing (not technical) and glacier hikes – but this is not for everybody, it requires good physical shape and relevant knowledge and experiences with all sorts of difficulties and potential hazards that are part of the nature of an arctic environment.

For a more relaxed approach – but very rewarding! – it is possible to get accommodation and food in the hotel in Pyramiden. You will need a guide (or your own weapon etc.) for excursions, including even activities within Pyramiden, but this is locally available if needed. Recommended!

This page is about the general area of Dickson Land and Billefjord. There is a special page about Pyramiden (click here) with a lot of information. 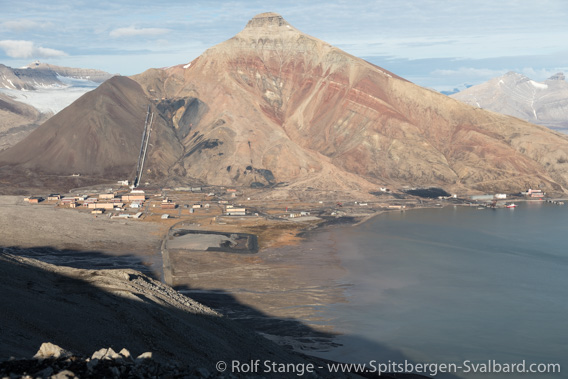 The Russian settlement of Pyramiden in Billefjord: abandoned as a mining settlement in 1998,
still active and popular as a tourist destination.

There is a number special pages on this websites dedicated to various individual sites in the Billefjord area, with more information, panorama images and photos, for example:

Billefjord itself and the land areas around its northern part are not part of any specially protected area, but the general environmental regulations apply as anywhere in Spitsbsergen (see rules).

The area around the Billefjord belongs geologically to the most interesting parts of Spitsbergen, so I dedicate some space to the matter.

The pre-Devonian basement is exposed only near Nordenskiöldbreen and north of the Billefjord. On both sides of the fjord, but especially in western and northern Dickson Land, reddish sandstones and conglomerates of the Devonian Old Red give the landscape an appereance with beautiful colours. 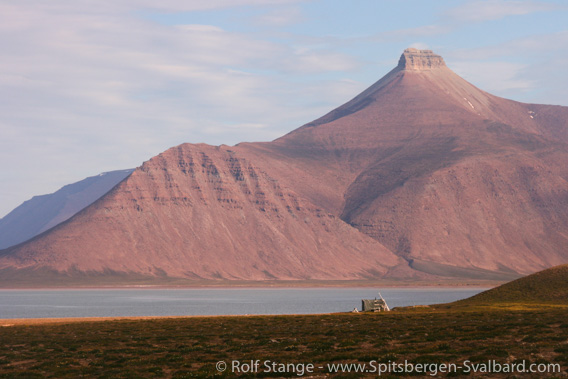 Devonian Old Red in the mountain Lykta in Dicksonfjord. The highest part consists of hard Carboniferous limestone layers. Old Red and limestone are separate by the Svalbardian unconformity (see text below).

Fossilised tree trunks found in Devonian rocks in Hugindalen are of truly respectable age. They belong to the oldest fossilised remains of large plants on Earth.

The coal seams that were mined in Pyramiden date to the Carboniferous, meaning that they are younger than the above-mentioned plant fossils (but still much older than the coal mined in Barentsburg, Grumantbyen, Longyearbyen and Ny-Ålesund, which was all from the lower Tertiary). As the name says, the Carboniferous was a period of coal formation of global importance.

In the Carboniferous and Permian, various sediments were deposited, including evaporites such as gypsym and anhydrite. Attempts to mine these minerals were made in Skansbukta (see history section below). They can be multicoloured, giving the landscape a colourful appareance, for example the slopes of the mountains near Adolfbukta and north of Billefjord. There is, for example, a mountain called Trikolorfjellet (‘Three colour mountain’). 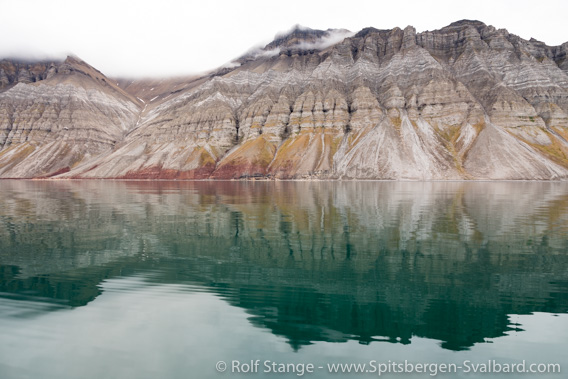 Mountains on the east side of Billefjord: colourful geology from the upper Carboniferious up into the lower Permian.

In the Permian, deposition continued mostly with carbonates, among others the hard, fossil-rich limestones of the Kapp Starostin Formation (a name that you may have heard before if you are interested in the regional geology). In Dickson Land, they often form prominent cliffs and waterfalls. 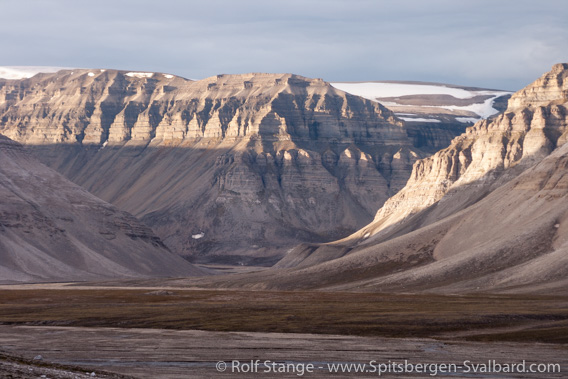 After a break of deposition in the uppermost Permian, Mesozoic ‘platform sediments’ were deposited in large parts of central and southeast Svalbard, including Dickson Land, where they are preserved in the southern part. In other words, regarding the geology and general character of the scenery, there are parts of southern Dickson Land that are more similar to Barentsøya or Edgeøya than to Dickson Land further north or Billefjord!

Phosphoritic concretions within the Triassic sediments of southern Dickson Land were tought to be economically exploitable, which lead to investigations initiated by the Swedish explorer Adolf Erik Nordenskiöld and an attempt to establish a colony and a phosphorite mine at Svenskehuset near Kapp Thordsen. In the same area, the name ‘Saurierdalen’ points to fossils of large marine reptils found in southern Dickson Land.

The lively history of regional tectonics gave rise to an interesting geological variety within a relatively small area. The rocks are partly aesthetically folded. The Billefjorden fault zone runs straight through the long Wijdefjord in the north and through Billefjord. This is one of the most important tectonic lineaments in Svalbard. 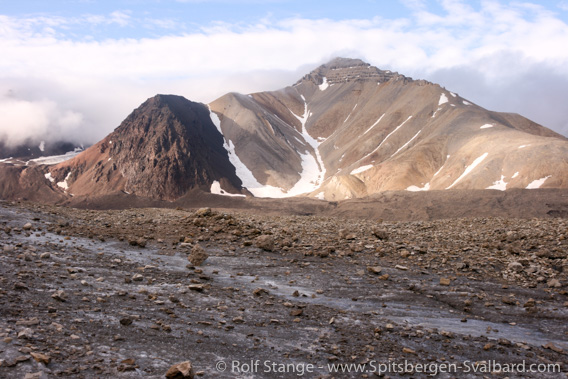 Another tectonic event happened in the uppermost Devonian, the so-called Svalbardian Phase, a very late, final stage of the Caledonian orogeny which is otherwise largely confined to the Silurian. The result of regional uplifting and tilting is an unconformity between the Devonian Old Red and the upperlying Carboniferous carbonates. This is well visible (at least for the trained eye), as the relatively soft Devonian sandstones and conglomerates form soft, reddish slopes topped by steep cliffs of yellowbrown carbonates (Pyramiden, Triungen, Lykta, Kinamurfjellet etc.). For an example, see photo of mount Lykta above.

Also the Quaternary geology is very interesting. All glaciers in the area have retreated strongly in the late 20th century and even more so in more recent years, leaving large, ice-cored moraines. There are beautiful series of fossil beach-ridges for example at Brucebyen. Solution of sulfates and carbonates led to the formation of karst phenomena such as sink holes in Mathiesondalen and Gipsdalen (Bünsow Land), and fallout of dissolved minerals led to quick diagenesis (hardening) of holocene sediments such as deltaic deposits and moraines in Mathiesondalen and north of the moraine of Hørbyebreen.

According to the varied geology, there is a variety of different landscapes to be seen. Near the coast, there are often beautiful tundra areas with very evident beach ridges. The ‘hinterland’, the area east of Billefjord and Bünsow Land, is strongly glaciated, whereas Dickson Land is relatively ice-free. 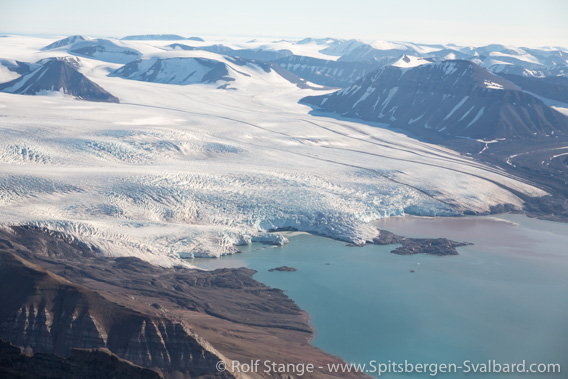 The glacier Nordenskiöldbreen is one of the main eyecatchers in Billefjord.

Around Billefjord, permocarboniferous carbonatic rocks form partly spectacular steep cliffs dissected by erosion, thus often forming regular towers and sometimes bizarre sculptures such as Tarantellen north of Billefjord. This rock tower (Tarantellen = ‘the tarantula’) is worth seeing, but it takes a long and demanding hike to reach it from the northern end of Billefjord through a steep, narrow valley. It is a double arch more than 20 metres high, which looks like a giant stone spider (see pictures in the Petuniabukta gallery at the end of this page). 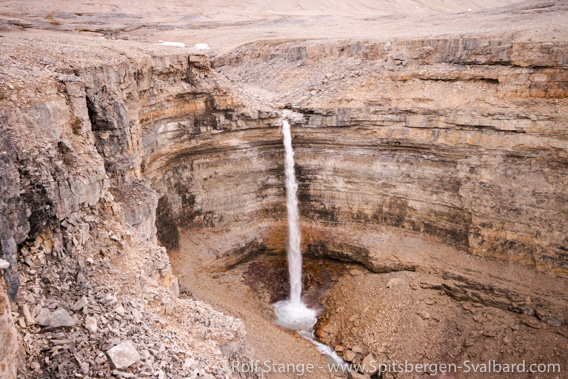 Sjursethfossen is the highest waterfall in Dickson Land.

Other cliffs are built up by the Permian Kapp Starostin Formation, for example on the northern side of Skansbukta and elsewhere. In inner parts of Dickson Land, these slopes often form steep canyons and waterfalls. 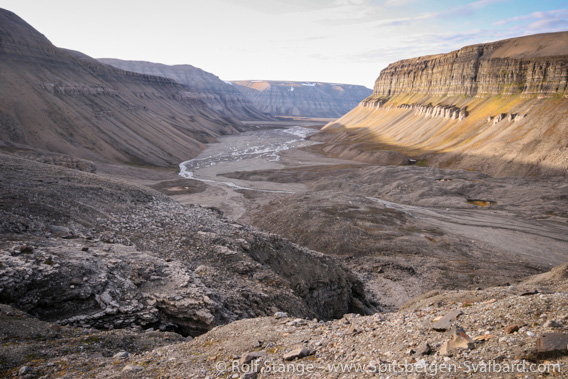 In southern Dickson Land, landscapes within the Triassic sediments remind one of places with a similar geology for example in eastern Nordenskiöld Land (east of Longyearbyen), Edgeøya etc. Here, doleritic intrusions sometimes form irregular ridges and cliffs in the slopes. Small ice caps cover parts of the high plateaus, which are dissected by steep canyons. 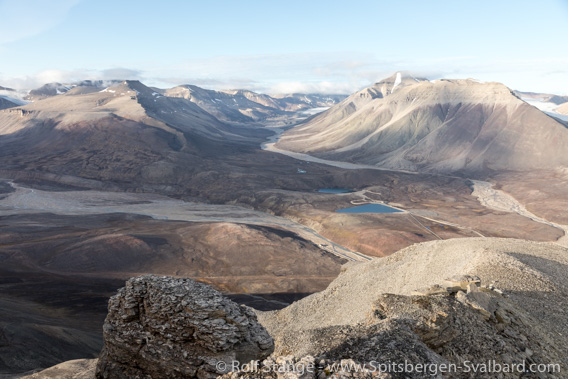 In central northern Dickson Land, the Old Red with its beautiful, reddish-brown sandstones and conglomerates dominates the appareance of the landscape; here you find several ice-free valleys with warm colours on the round lower and middle slopes (Hudindalen, Nathorstdalen). On top of these slopes, hard carbonates form steep cliffs, so it is often difficult to reach the summit. 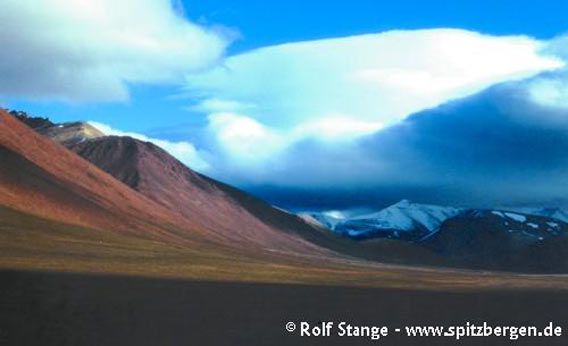 Tundra in Nathorstdalen with slopes composed of Old Red sandstone with its warm colours.

Further north, around Ålandvatnet and Mittag-Lefflerbreen, metamorphic basement and sedimentary cover rocks form a mosaic because of the tectonics related to the Billefjorden fault zone (see above). In the area of sedimentary cover rocks, there are some mountains with beautiful colours, the slopes of which are sometimes nicely dissected by erosion to form regular towers. In contrast, the harder basement rocks form steeper mountain slopes with a more irregular shape. Near Mittag Lefflerbreen, huge morains form chaotic, ever-changing landscapes around the lakes of Ålandsvatnet and Hoglandvatnet. The latter has largely disappeared.

The summers are relatively warm in Billefjord, and there is quite rich tundra near the coast and in some of the large, ice-free valleys of Dickson Land. On steep cliffs, there are colonies of seabirds. Spitsbergen reindeer and arctic foxes are common. 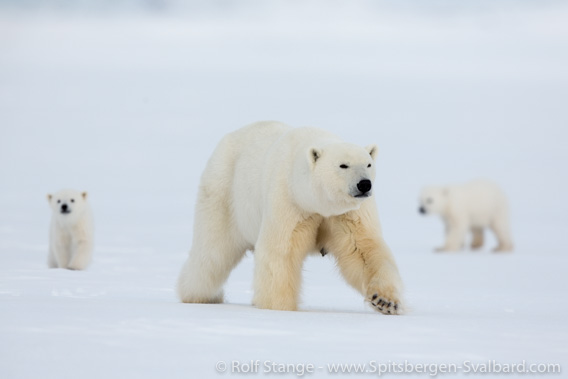 In recent years (from 2013), polar bears were regularly seen in Billefjord, often near Nordenskiöldbreen, but also near or even in Pyramiden. At least one female, which achieved fame under the name Frost, has settled down and become quite stationary in the area, including neighbouring branches of Isfjord as far as Adventfjord (Longyearbyen!). And she is not the only polar bear in Isfjord. So be careful wherever you are, including Pyramiden itself, where the buildings keep you from having a good overview over the surroundings.

I do not know of any activities of 17th century whalers in the area, although Billefjord was actually named after one of them. Pomors used the area as well as Norwegian trappers. Kapp Wijk Dickson Fjord was the home of the legendary Arthur Oxaas between the wars in the 20th century. Oxaas was followed by Harald Soleim. 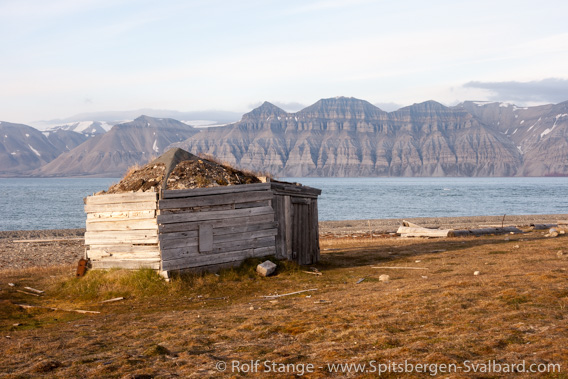 Old trappers’ hut on the south side of Skansbukta.

Mining was attempted at various sites in Billefjord in the 20th century. The Scottish Spitsbergen Syndicate (SSS) with William Speirs Bruce investigated Carboniferous coal east of Billefjord and built Brucebyen for this purpose.

Another early attempt to explore minerals was done by the Portland Cement Fabric, which established mining facilities in Skansbukta, but here as well as in other places the occurrence turned out to be economically worthless. The entrance to the mine as well as someold machinery can still be seen.

Large-scale mining was done in Pyramiden. Founded 1910 by a Swedish company, Russians to over the area in 1926. But mining did not seriously start until 1940 and was, with interruptions, continued until 1998, when the mine was finally abandoned (access the Pyramiden page by clicking here for more information).

Skansbukta has some stunning scenery, interesting history and – if you get close enough at the right time of year – beautiful flowers. All this makes the place a popular excursion site. Some impressions from classic as well as more unusual perspectives:

Some photos from Dickson Land, illustrating mainly the kind of impressions you might get during long summer hiking tours.

And finally some pictures from beautiful Petuniabukta, the northernmost part of Billefjord: