The Norwegian authority for Fishery (Fiskeridirektoratet) has opened an area for shrimp trawling that has been off limits for fishing ships until now. Hinlopenrenna includes Hinlopen strait as well as deep water areas north and south of it.

The press release of the Fiskeridirektoratet does not include any further details.

The Norwegian Kystverket (coastal and navigation authority) plans to introduce compulsory pilotage for most of the waters around Spitsbergen. Coal freighters to Sveagruava may have to carry pilots already in the upcoming summer of 2012. From 2014, this will apply to all ships longer than 70 metres and passenger ships longer than 24 metres. Only parts of Isfjord and Bellsund will be excluded.

Captains with sufficient experience and local knowledge can, after a test, be certified to be excepted from compulsory pilotage. If this is practicable remains to be seen: costs and fees will be high, and it should currently not be taken for granted that tests will be available in other languages than Norwegian. Another requirement will probably be that a certified Captain or navigation officer is in charge on the bridge at any time when the ship is moving. This will hardly be practicable for smaller ships and it does not contribute anything to nautical safety: large parts of most common sailing routes in Spitsbergen (Svalbard) are nautically very easy and straightforward and can easily be handled by all navigation officers.

Smaller ships between 24 and 100 metres, so-called expedition cruise ships, will be threatened with an immediate termination of their activities: the costs for pilotage during a 10 day cruise will be beyond 100,000 Euro, an amount that makes sailing economically completely impossible.

Large parts of the waters around Spitsbergen are deep and well enough charted by now to allow comparatively easy navigation. Where pilots can be found who can make a noticeable difference in more difficult waters, compared to what present-day Captains can do, remains an open question at the time of writing. The law is supposed to enter force on 01 July 2012.

Spitsbergen is annually visited by ships of different sizes. The harbor of Ny Ålesund. 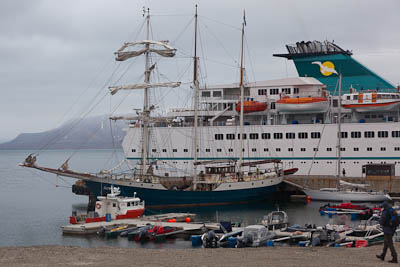 While central and eastern Europe are suffering from severe cold, temperatures in Spitsbergen are higher than ever measured in February. Measuring was started in 1975. Longyearbyen airport had 7 degrees centigrade above freezing, exactly 1 degree higher than the previous record for February (measured 17.2.2005).

Also Sveagruva has the doubtful honour to present a new record, amounting to 6.5 degrees, or 1.3 degrees higher than previously (5.2 degrees on 22.2.2006). Also the other stations in Ny Ålesund and on Hopen and Bear Island have temperatures above freezing.

Towards the weekend the mercury is expected to drop well below zero again.

Hardly any drift ice around Spitsbergen

Not only the weather, but also the ice situation around Spitsbergen is currently very unusual. Especially the relatively high water temperatures have a strong effect on the formation and distribution of drift ice. Statistically, the annual maximum is reached in April. As little ice as now in early February is very unusual.

Further east, in Franz Josef Land, there is a dense and extensive drift ice cover. 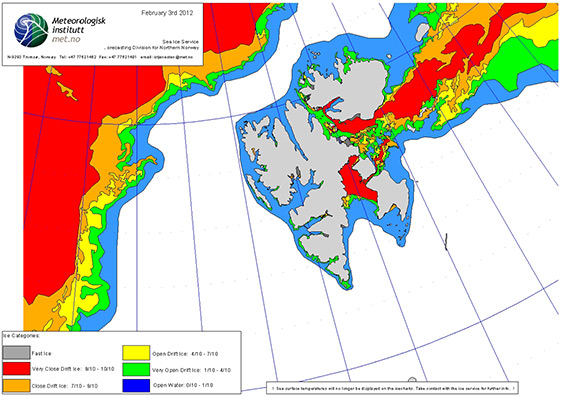 The last days have seen some rather unusual weather phenomena in Spitsbergen. On Monday (January 30), Longyearbyen was the warmest place in Norway with 4 degrees centigrade above freezing. 26,5 mm of rain did not make it more enjoyable, and as a consequence, several roads had to be closed due to a strongly increased avalanche risk and a landing at the airport had to be cancelled due to slickness.

The rain was nothing compared to Ny Ålesund, where a considerable 98 mm were measured within 24 hours, which is clearly a local record. The warmest day measured in Spitsbergen so far in January was however January 01, 2006, when the mercury went up to 7,7 degrees. In comparison, one year ago (January 30, 2011) it was as cold as 31,5 degrees below zero.

Changing weather with cold and warm spells is typical for the cold season, but the recent warm phase is unusually long and intense.