It is well known that environmental pollutants such as PCBs that originate from industrialized countries accumulate in the food chain in the Arctic to high levels in species such as Polar bears and Glaucous gulls, both top predators in this environments. Trends in “old” toxins have been observed to be decreasing in recent years, due to bans of relevant substances for example in the EU. It takes a long time for levels to decrease because all relevant substances have in common that they are long-lived, they are still used illegally and some countries have so far failed to issue bans.

The bad news is that new organic pollutants have been found. Production of chemicals for fireproof materials (electronics, furniture, clothing) seems to be the most significant source. Perfluorooctanesulfonic acid (PFOS) seems to be an important new threat; this substance has already reached high levels for example in fat tissue of Polar bears in Svalbard.

Also regional CO2 levels continue to show alarming trends. CO2 is mixing quickly in the atmosphere over the globe, which means that regional trends reflect the global development. The atmospheric observatory on Zeppelinfjellet near Ny Ålesund in Spitsbergen, the average for the first 100 days of 2008 was 391.1 ppm (parts per million), as compared to 388.8 ppm for the same period in 2007. Single measurements beyond 400 ppm are likely to be observed in 2009.

Thawing ice of a pingo in Spitsbergen. Natural part of the complex life cycle of such a permafrost structure. Or result of man-made climate change.

Thawing ice of a pingo in Spitsbergen. Natural part of the complex life cycle of such a permafrost structure. Or result of man-made climate change. 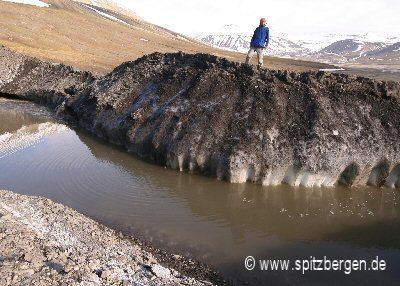 In recent weeks, the Russian mining settlement of Barentsburg has suffered from several accidents. Three persons died during a helicopter crash at Kapp Heer, the helicopter base near Barentsburg, The aircraft collided with a building during a landing attempt in bad visibility conditions. On Thursday, 17 April, Barentsburg reported fire in the coal mine. One miner was found dead a while later, while a second one is still missing.

There are still 500 people living in Barentsburg.

New regulations for the growing tourist traffic in Svalbard’s national parks and nature reserves have been in process for a while. In March 2008, the governor (Sysselmannen) has published some details, including:

The Haudegen station from World War II in Rijpfjord (Nordaustland) is amongst the sites that are likely to be closed to visitors.