One of four historical huts in Brucebyen burnt completely down on August 17. A group of young hikers had left hot ashes behind when they left the hut, which had been built in 1919/1920 as part of a coal mining camp. 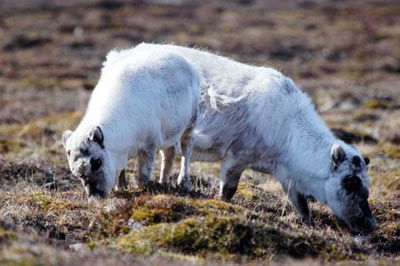 The Norwegian coastal authorities have been out on a field trip around Spitsbergen’s coasts to evaluate locations where ships might seek shelter in case of emergency. Representatives of the Norwegian Polar Institute, the ministry of the environment, the governor and the Norwegian research institute on marine technology (MARINTEK) were on board during the field cruise.

On the west coast, the best sites known so far are in Magdalenefjord, Trygghamna and Hornsund. The experts and officials involved want to discuss further sites and publish their recommendations within 2010. The need for more emergency shelter sites is seen because of increased ship traffic in Svalbard waters.

The polar sea ice has its widest distribution during the late winter. The return of the sunlight in spring brings the algal bloom under the ice floes. As a result, zooplankton comes from deeper water layers to the ice to feed on the algae. These small animals are again prey for larger organisms such as fish and seals and thus, directly or indirectly, for the whole rest of the food chain up to polar bears. The basics of this system are common knowledge, but scientists are still working on many important details.

Marine biologists from the university in Longyearbyen (UNIS) have found out that the little crustaceae (in this case Calanus glacialis) are perfectly adapted to the seasonal development of sea ice in spring. The adult females eat as much as they can in the twilight under the closed sea ice cover, until they are able to reproduce. Two months later, their offspring is large enough to profit from a second algal bloom when the sea ice breaks up. These young, fat crustaceae are ideal food for polar cod, seals, seabirds such as guillemots and whales.

In case the sea ice is getting thinner and thinner due to climate change, the breakup will be earlier and the second algal bloom accordingly earlier. As a result, the young phytoplankton might not yet be old enough to feed sufficiently, which might lead to significant weakening of this important link in the arctic food chain, possibly leading to major disturbances of the arctic ecosystem as we know it.

The colouration of the ice is due to algae. In the middle a beached representative of the arctic marine fauna that depends on the algal bloom for food.

It has been know for a long time that Spitsbergen is an Eldorado for palaentologists, including those specialized in dinosauria. The discovery of a Pliosaur at Janusfjellet, north of Longyearbyen, in 2007 has raised worldwide attention not only amongst specialists. In 2009, three skeletons of Ichthyosauria (marine carnivorous dinosaurs) were found and to be retrieved this year, when the scientists made another spectacular discovery: a Plesiosaur with a three meter long neck. Now, the researches want to use their findings to reconstruct the course of evolution in the polar sea of the Cretaceous.