The females of this large seal with its distinctive moustache can weigh 400 kilograms. Mostly you see them lying on ice or swimming in the water and with a little luck you can get pretty close to the Bearded seals on Svalbard. 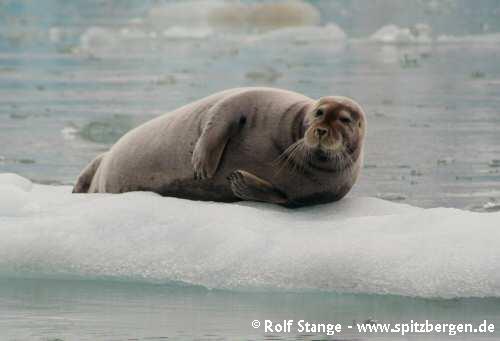 A large sausage with a small head is usually a Bearded seal (Here: Fjortende Julibukta).

Description: The Bearded seal is up to 2.5 m in length and up to 300 kg in weight, in some cases (females in spring) even up to 400 kg. Second largest seal species in the arctic, only the walrus is larger. The female Bearded seal is slightly larger than its male counterpart, but the sexes look very much the same for most but trained observers. As a species, they are easy to identify by shape and proportions: a large, square-shaped sausage with a small head on ice, that is usually a Bearded seal. Stron moustache. You will usually see individual Bearded seals on ice floes or swimming in the water, occasionally two or three, but not in larger numbers and hardly ever on land.

Distribution / Migration: Bearded seals can be found in many parts of the arctic. They prefer not too deep coastal waters with some drift ice, often fjords with calving glacier fronts, and they stay year-round in Svalbard waters.

Biology: Moulting is spread over most of the year, but is strongest in June, after mating. Bearded seals will eat almost anything that lives on the bottom, such as mussels, crabs, other crustaceans, fish and anything else that moves on the ground and in the water. The whiskers are organs with a very sensitive sense of touch, thus helping to find prey at depths of up to 200 metres. Many Bearded seals end their lives as a Polar bear’s meal, but Orcas, Greenland sharks and Walrus with slightly abnormal taste can also be dangerous predators.

Females give birth on ice floes in early May, and the single pup is able to swim after only a few hours. To begin with, they live on approximately eight litres of milk each day with a fat content of about 50 percent. After about three weeks, they can dive and find their own food. Bearded seals have a life expectancy of 20-25 years.

Miscellaneous: With some luck and a boat you can often approach Bearded seals quite closely. They are hunted outside the protected areas and outside the breeding season. As in Greenland, seal meat is mostly used to feed dogs. Hunting is limited in popularity, as you cannot refuel snow mobiles with seal meat. 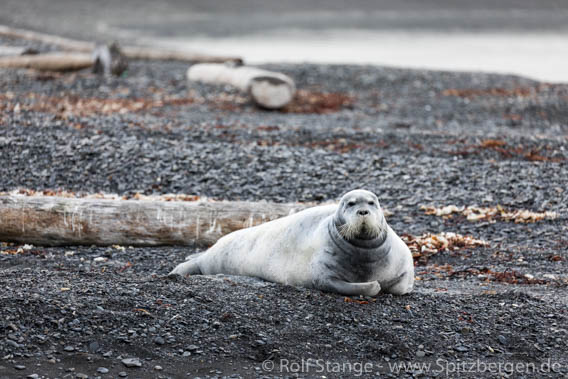