To start with, we have to define what we are talking about. You can call any kind of floating ice drift ice. This includes icebergs, which is land-borne ice, derived from glaciers. In a stricter sense, we think of frozen seawater when we are talking about drift ice. Ice floes, more or less flat. In case these ice floes are pushed together by wind and currents, hardly leaving open water between them, you have pack ice. 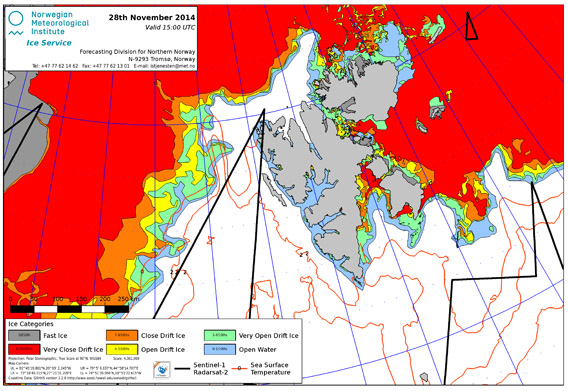 The ice chart of the Svalbard area, 28 november 2014, shows a typical drift ice distribution with a lot of ice in the east (actually, more than usual in november) and an open west coast. The oceanic currents control this typical pattern. © Norwegian meteorological institute, available via Polarview.

The drift ice distribution in Spitsbergen is controlled by two oceanic currents: the West Spitsbergen Current keeps the west coast and, to a varying degree, the north coast ice free, while the colder East Spitsbergen Current brings a lot of drift ice from the Arctic Ocean to eastern Svalbard. The central west coast (Kongsfjord, Isfjord) is mostly accessible for smaller ships more or less year round; the inner branches are usually frozen, though. On the north coast, it chances from year to year. In some years, the whole north coast to Amsterdamøya in the west is blocked with dense drift ice. In other years, Sjuøyane or even Kvitøya are accessible in late June or early July. On the contrary, in 2014 the eastern part of Nordaustland did not become ice free at all.

The current that is slowly moving southwards on the eastern side of the archipelago brings a lot of drift ice well into the summer. The current is going around the south cape (Sørkapp) of Spitsbergen, then taking a northerly course again, following the southern west coast. As a result, the southern fjords like Hornsund and sometimes even Bellsund are often blocked by ice in the early summer, when the west coast further north is ice free. Some drift ice fields can drift further north and move around in Isfjord in July, but that does not happen too often. 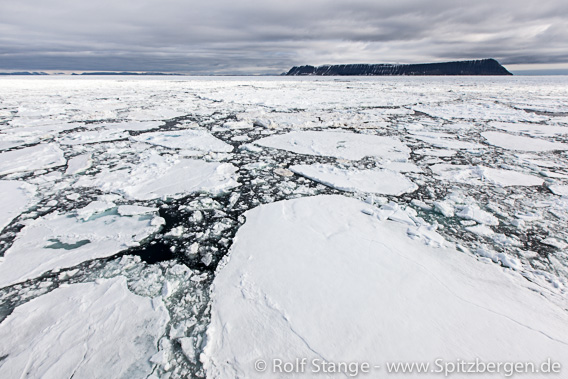 Despite of these strong fluctuations from year to year, the current long-term trend is quite clear. It is now much easier to reach remote islands in northeastern Svalbard that used to be in ice most of the time as recently as 20 or even 10 years ago. In 2000, tour operators did not schedule circumnavigations earlier than mid July. By now, it is common to attempt circumnavigations in early July or even to start in late June, and chances for success are not that bad at all. Scientific data support this experience. Both the spatial and seasonal extent of sea ice and the average ice thickness have decreased. Whereas ice floes used to be 1.20 m thick in the Spitsbergen area in the past, they are rather near 0.80 m now.

Ice is, however, much thicker wherever it is pushed together. Edges of ice floes pushed up above each other form so-called pressure ice ridges or just pressure ridges. These ridges are long, but rather narrow ridges of chaotic ice blocks and fragments of floes that can be several metres high, 12-15 m and even more have been observed in the Arctic Ocean, where huge masses of ice are being moved around and against each other by currents and winds without any protection of land. Such mighty pressure ice ridges have isostatic roots. In other words, they don’t just protrude up into the air, but also down into the water. 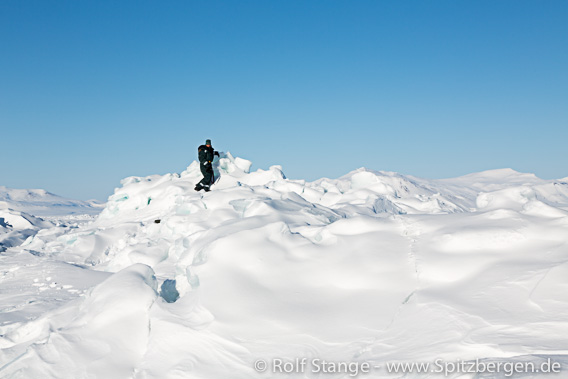 Fjord ice does not count as drift ice. It is also called fast ice, as it is in firm connection with nearby shores inside a fjord or small bay. It does not move horizontally at all, but it does move vertically with the tides, resulting in tidal cracks where the ice meets the shore. On calm days, you may here the ice moving near the tidal cracks. Fjord ice is relatively flat. The smaller fjords in Spitsbergen’s west coast fjord systems used to freeze over regularly in the past, but are less reliable now. Adventfjord has not been firmly frozen for several years now (late 2014), and Tempelfjord did not have a fast ice cover as good as it used to be in the past in 2014. The loss of fjord ice is bad for wildlife such as Ringed seals, which need ice to give birth and to rest. 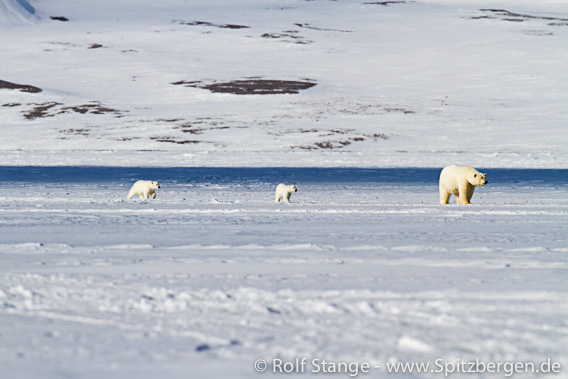 The big Isfjord used to freeze over quite frequently in the early 20th century, but it has never been frozen every year in historical times. It is known to have frozen over after 2000, but not in recent years.