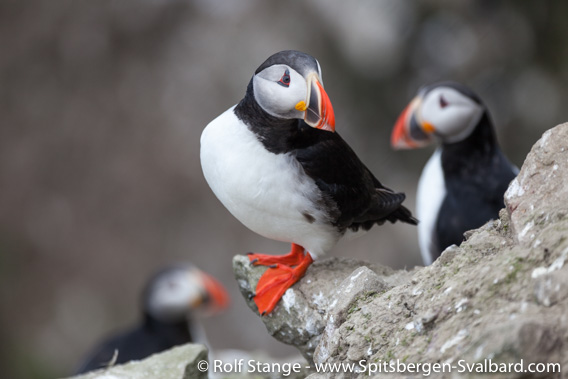 Description: The Atlantic puffin is a relatively small member of the family of the alcids (length 30 cm, weight 320-550 g). Puffins in Svalbard are slightly larger than birds of the same species in the sub-Arctic (Iceland, Færøe Islands, Scotland, Jan Mayen, northern Norway). In summer it is unmistakable due to its strong, colourful beak. 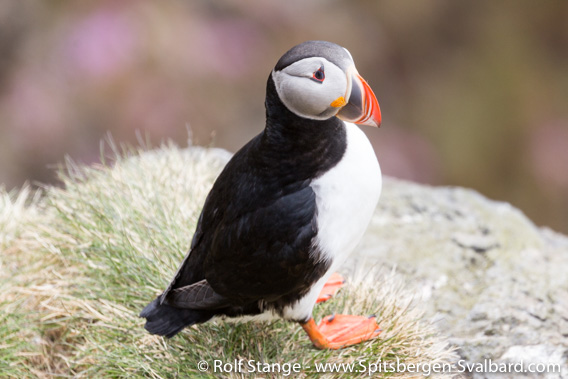 Distribution/Migrations: Puffins breed mainly in the sub-Arctic, also in smaller numbers in high Arctic areas in the Atlantic (there is a similar species in the northern Pacific). Most birds in Svalbard breed on Bjørnøya, but others are at home on the west and north coasts of Spitsbergen and as far as Sjuøyane, but in much smaller colonies compared to those in the sub-Arctic. There are a surprisingly large number of Puffins breeding on Vesle Tavleøya north in Sjuøyane, the northernmost part of Svalbard. 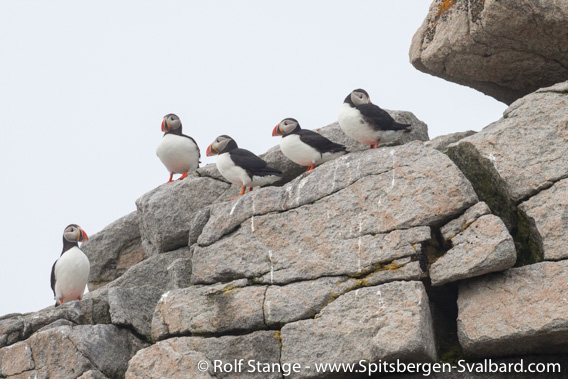 The wintering areas are not exactly known but will be somewhere in the north Atlantic. Puffins return early to their breeding sites in early or mid May and stay well into August.

Biology: In the sub-Arctic, Puffins breed in large numbers in small caves on the top edge of steep cliffs. Lack of suitable soil and permafrost make this mostly impossible in Svalbard, so they have to breed on ledges of steep cliffs, as other auks, and occasionally in crevices between large boulders. Colonies are smaller and less dense than further south. Both parents incubate the single egg for six weeks. The chick stays at the nest for another five to ten weeks, until it is able to fly.

The slow reproduction rate is balanced by a high life expectancy: Once a Puffin is fully grown, it has a good chance to reach an age of 30 years or even more. 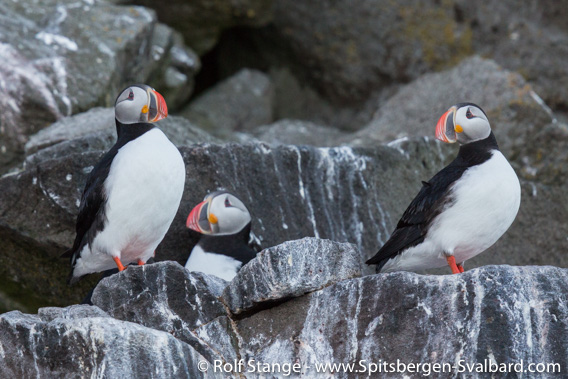 Miscellaneous: Don’t expect observation opportunities in Spitsbergen as good as in Iceland, the Færøer Islands, Scotland or Norway, but there is often a Puffin flying by. Recent years have seen dramatic collapses of breeding colonies for example in Lofoten (Norway) for reasons that are not yet fully understood, but overfishing is likely to be an important factor, directly or indirectly. Estimates for the total population in Svalbard are near 10.000.