In the second half of September 2014, I finally managed to panorama-photograph the grand view from Observatoriefjellet in Recherchefjord. It was not the first time I carried the panorama equipment up to the 576 metre high top, but the first time for a while the visibility was still got when we got up. This is not always the case …

This September day in 2014 was pretty cold, it was an early winter with a lot of early snow. We were a bit late in the day, as we had been cruising a while in Van Keulenfjord, hoping to find a polar bear (without success). Of course, we still wanted to get up to the top of Observatoriefjellet before sunset, so the ascent on the snow-covered slope was a bit of a sweaty affair.

But the view was clearly worth the effort. When we reached the top, the sun was still above the mountains in the west. Grand views to all directions: Chamberlindalen with its steep glaciers in the southwest, the mountains separating Recherchefjord from the west coast in the west. To the north, Recherchefjord and the large Bellsund behind it. The main eyecatcher is probably Recherchebreen (-glacier) in the southeast with the forelying lagoon, which was already mostly frozen at that time. Stunning views! I shot these two 360 degree views on this occasion. 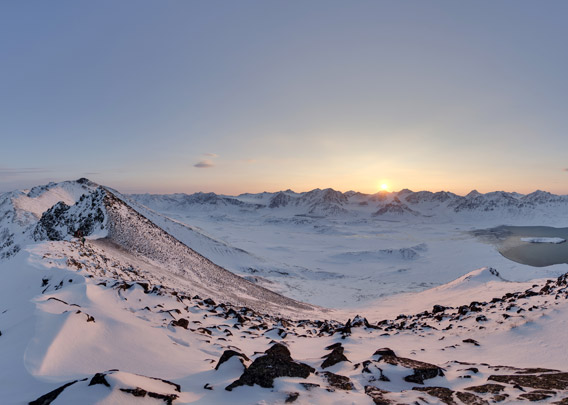 The following, third panorama from Observatoriefjellet is from August 2012, still the pre 360 degree era, but nevertheless nice so I keep it in here: 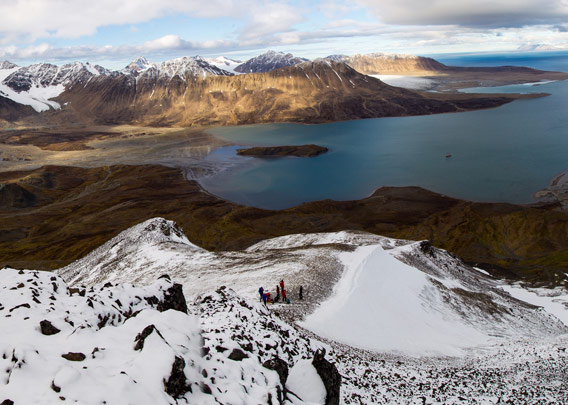 View from Observatoriefjellet south of Recherchefjord over Chamberlindalen (left side), Recherchefjord and, in the distance, Midterhukfjellet (centre) and Recherchebreen (-glacier) and its lagoon on the right side.
Fresh snow from the night before. Late August 2012.