Martinodden ist a small headland on the southwest coast of Edgeøya. It is part of an area of several square kilometres that has a series of small capes, bays and islands. This area consists of diabas, a basalt-like kind of rock. The southernmost one of these bays is Habenichtbukta, the northernmost one is Gothavika, a name given by August Petermann from Gotha (Thuringia, Germany) in the 19th century.

We can see Gothavika to the north (under the clouds) in this panorama. There is another bay on the opposite side, which is unnamed. It is part of Ekrollhamna, natural harbour that consists of several bays. But this natural „harbour“ is so shallow that it is partly unnavigable even for Zodiacs, at least at low tide, and some of the bays are completely inaccessible. 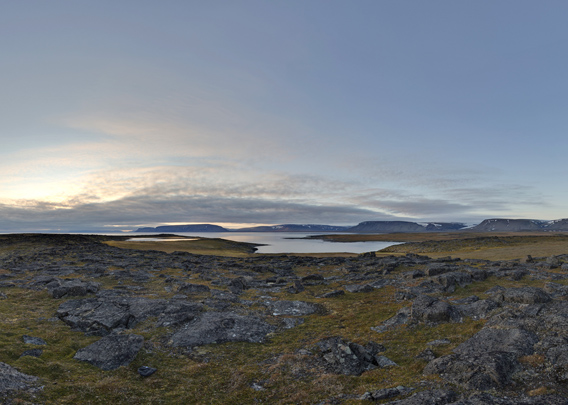