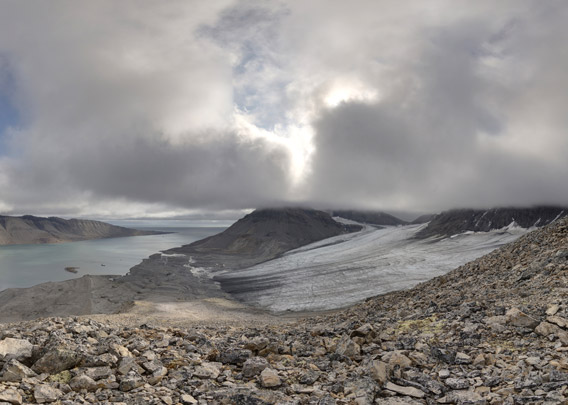 The little mountain Knuvlen is situated between glaciers close to the coast in innermost Trygghamna. „Trygghamna“ means „Safe Harbour“, a name given by English whalers in the 17th century; also known as „Behouden Haven“, the equivalent name used by their Dutch competitors. It was kind of a safe natural harbour for them, close to the open sea. But it can be quite stormy in Trygghamna when the wind is blowing north-south!

The innermost part of Trygghamna did not exist in the 17th century. Most likely, this area was covered by glaciers, which were much larger back then. Knuvlen is still surrounded by glaciers on several sides (Protektorbreen, Harrietbreen).

Knuvlen is not higher than 333 metres, but the slopes are quite steep, so you have to do a bit of work to enjoy this amazing view. The sandstone is frost-weathering to form huge, sharp boulders which are not exactly great for walking. But the view is worth the effort!