General: Danskøya (“Danish Island”) is a rather small island and the northwestern corner of Spitsbergen. It is famous for the north pole expeditions launched by the Swede Salomon August Andrée and the American Walter Wellman from Virgohamna on Danskøya.

Special permission is required to land at Virgohamna, and strict regulations are to be followed to protect the historical heritage. 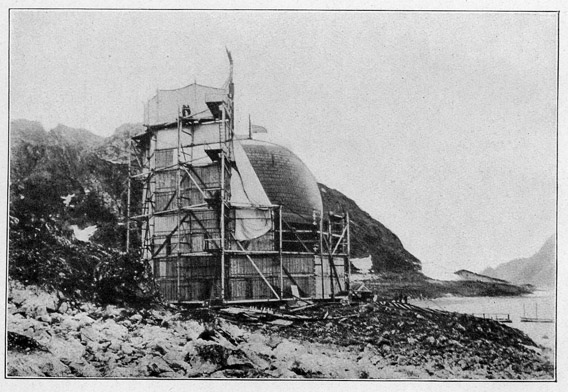 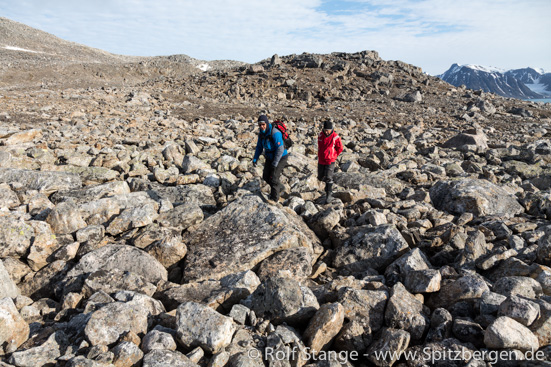 Hiking over stones and boulders on Danskøya.

Landscape: Most of Danskøya is made up of rocky hills up to 300 metres high (maximum 351 m). The surface ist mostly covered with big stones and boulders (click here for a panorama photo of that kind of landscape on the east side of Danskøya). The eastern part of the island, towards Smeerenburgfjord, is more flat. On the western side, the bay Kobbefjord (“seal bay”) is cutting into the island. It is generally possible to make different nice hikes on Danskøya, but the rocky surface makes hiking quite demanding and inconvenient unless you are used to that kind of terrain. There are no glaciers, but some permanent snowfields and some small lakes. 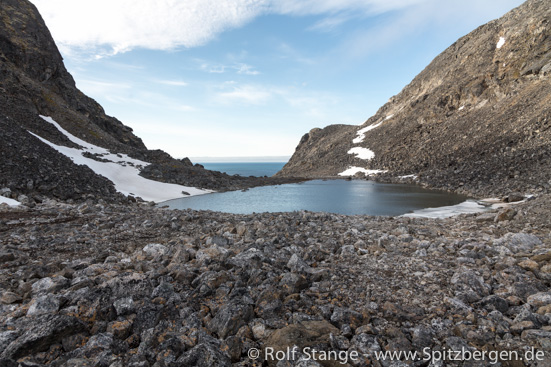 Flora and fauna: Vegetation is very scarse, mostly limited to moss beds. Harbour seals, a rare and unusual seal species in the high arctic, are often seen on stones near the shore, especially during low tide. Purple sandpipers are abundant, looking for food in the tidal zone. Arctic fox and polar bear are roaming across Danskøya more or less regularly. 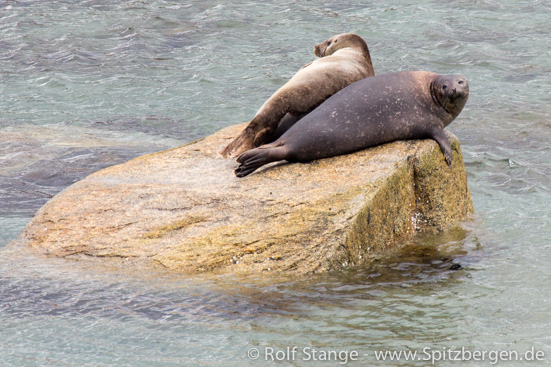 History: The history is the main attraction on Danskøya, attracting visitors in significant numbers, almost exclusively to a very limited area in Virgohamna. This is the site where Salomon August Andrée from Sweden tried to launch his balloon Örnen (The Eagle) in 1896 and 1897. He and his 2 fellow comrades disappeared and were found dead only in 1930 on Kvitøya. In 1906, 1907 and 1909, he was followed in the same place by the American journalist Walter Wellman, who tried to reach the north pole with his airship America, but failed on all attempts. Both left a lot of artifacts in Virgohamna, a lot of which can still be seen. See the race to the pole 2: Virgohamna in the history section of this website. 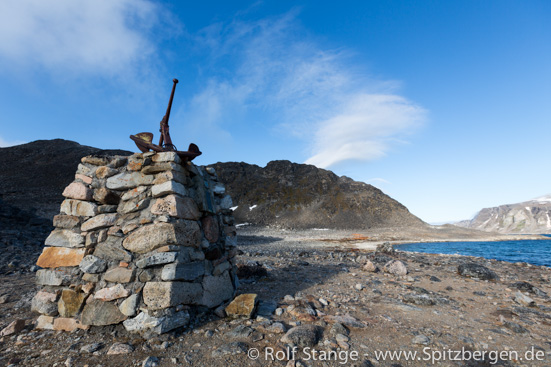 Monument for the Swedish balloon pioneer Andrée in Virgohamna, Danskøya. 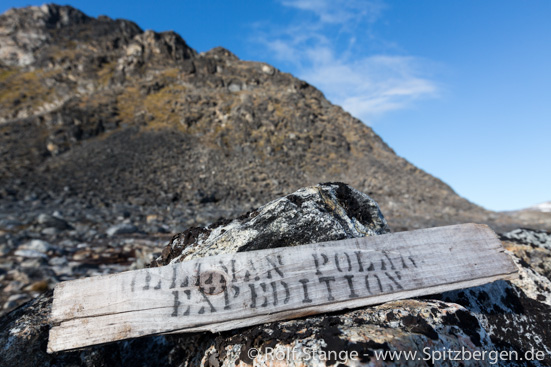 17th century whalers had their stations both in Virgohamna and in Kobbefjord on the west side of Danskøya. Those in Virgohamna, where both graves and blubber oven foundations can still be seen, where from Harlingen in the Netherlands. The whalers in Kobbefjord came from Denmark. There are no visible traces from that time in Kobbefjord. 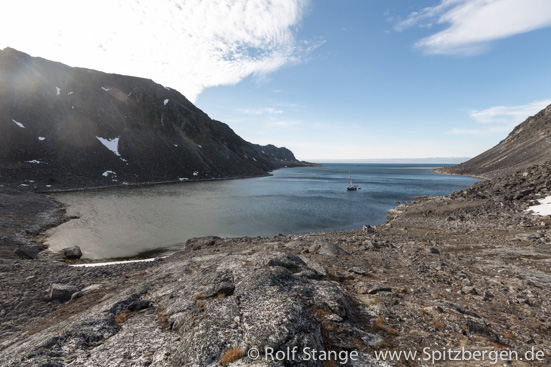 Kobbefjord on the west side of Danskøya. Danish whalers had a station here in the 17th century. In spring 1922, Kobbefjord was the stage of a tragedy when Harald Simonsen and Torgeir Møkleby died here.

In 1922, a tragedy took place in Kobbefjord, when the Norwegians Harald Simonsen and Torgeir Møkleby stranded there and starved to death. They had left a weather station at Kvadehuken in Kongsfjord with a boat to look for a trapper who was missing, but became trapped in ice and drifted northwards. They were found dead in 1923, their diaries could be recovered.