Chermsideøya is a rather small, barren, rocky island on the north coast of Nordaustland. 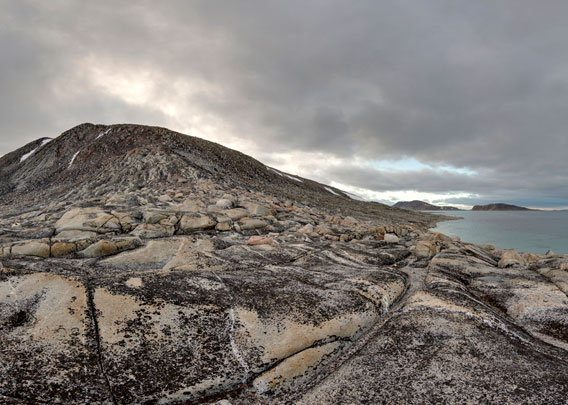 Chermsideøya is just one of a couple of similar islands in the area, and this island would hardly be worth mentioning if it wasn’t for a couple of expeditions in the late 19th and 20th centuries who made a stop here and created kind of geological graffiti by laying a name out with rocks on the surface, so-called geoglyphs. 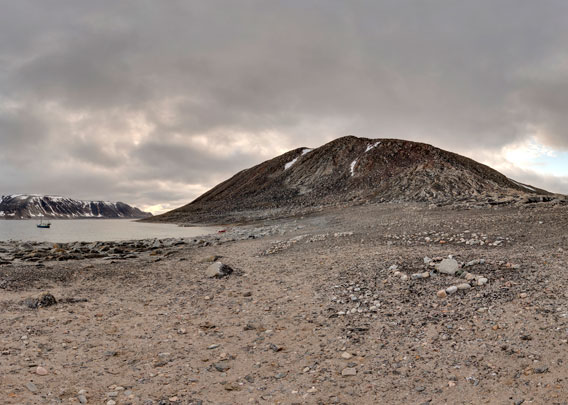 The oldest one is the word Jäderin, together with the year “1898” – Edvard Jäderin was the leader of the Swedish section of the Arc-de-Meridian expedition. There is, in cyrillic letter, the word Красин: Krassin was the Russian icebreaker that rescued Nobile’s men who were drifting on the ice near Foynøya in 1928.

And then there is yet another symbol, which comes as a bit of a tough surprise in this remote and generally peaceful landscape: a swastika. It is a bit uncertain who actually made it: candidates include a cruise of the state-operated leisure organization “Kraft durch Freude” (Strength through Joy) in Nazi-Germany in the late 1930s, or the submarine that brought the crew of the war weather station Haudegen to their destination in Rijpfjord in 1944. The submarine cruised indeed through these waters, but leader Wilhelm Dege does not mention a landing on Chermsideøya in his report, which is otherwise very detailed, especially regarding this leg of the voyage. On the other hand, a “Kraft durch Freude” cruise to this remote area appears rather unlikely.

Whoever it was: the swastika has later repeatedly been destroyed and reconstructed.

The panorama, taken from the reindeer perspective, does not really show the geoglyphs well, they come out much better in this photo taken from a bird’s perspective:

The geoglyphs on Chermsideøya from above.