An interesting article about polar bears in the light of climate change has been published by the Russian Academy of Science. Click here to read the article. 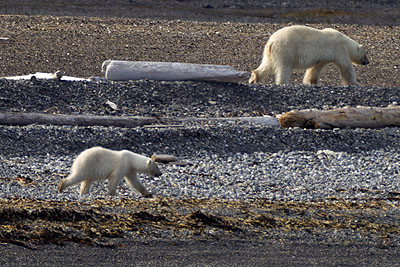 Libya and the north pole

The new Libyan government has announced a flight to the north pole together with representatives of NATO member states that took part in the 2011 military campaign. The flight aims at an increase of the feeling for togetherness within the Libyan society and a positive reception in the world public.

The Sysselmannen has, however, denied permission for a fuel stop in Longyearbyen. The organizers of the flight said they were disappointed and would try to take the issue up to a political level.

Longyearbyen airport: Not available to the Libyan government on their way to the north pole.

Parts of Spitsbergen may be added to the world heritage site list of the UNESCO. In 2012, a working group of the Norwegian government will start to compile an application that can be submitted to the UNESCO at a later stage.

Until now the geodetic station in Ny Ålesund is situated near the airfield, about 1 km from the village. The Norwegian topographic agency that is running the station intends to build a new station near the coast at Brandalspynten, a peninsula not far from Ny Ålesund. This is controversial because there is a general consensus that the environment near Ny Ålesund is to be kept in a natural condition as much as possible, to preserve the ecological and scientific values. The Norwegian ministry for the environment has now announced that permission will be given to build the new station.

It is expected that 5 years will be needed to build the new station and both stations will run parallel for 3 years to synchronize the data.

The old geodetic station at the airfield near Ny Ålesund 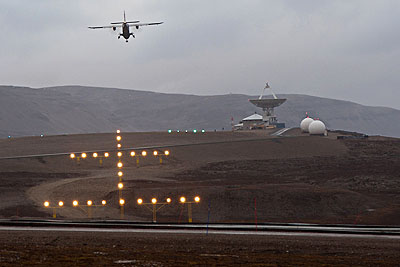 New coal mine at Lunckefjellet

The Norwegian department of economy and trade has announced that permission for a new coal mine at Lunckefjellet will be given. The mining company Store Norske Spitsbergen Kullkompani (SNSK) has applied for this permission to replace the mines at Sveagruva, which are declining in terms of quality and quantity of coal. The department has mentioned mainly economical reaons.

The Norwegian department of economy and trade is the most important shareholder of the SNSK.

Opening a new mine close to a national park is a controversial matter. The Norwegian government keeps saying it wants Svalbard to become “the best administered wilderness in the world” and pushes to close major areas to the public (see first December note). To the Norwegian government, opening a new mine near a ecologically very important tundra area seems to be less environmentally harmfull than small boats, rubber boots and limited visitor numbers in barren areas.

Environmental obligations, including a cleanup after the end of mining activities, are part of the permission.

Reindalen. The new mine will be directly south of it (right side). 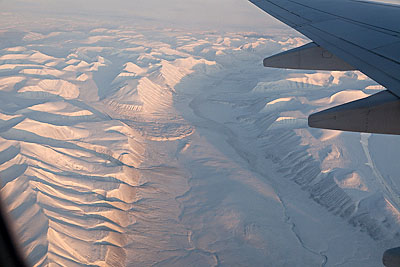 The working group of the Sysselmannen has produced a map as a base for the ongoing discussion about a management plan for east Svalbard. The current proposal will be forwarded to the Norwegian directorate for nature administration in January 2012. Later, it will go through another public hearing. The map below is the basis for the current proposal. 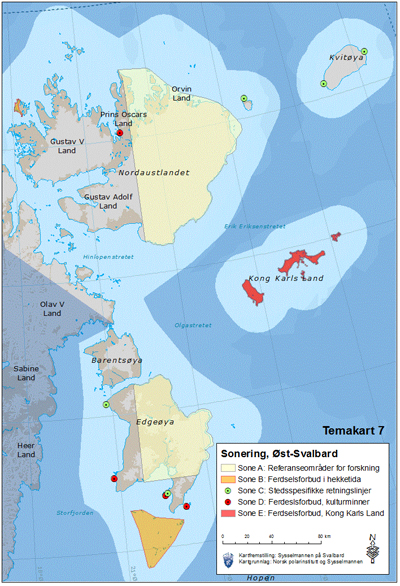 Zone A: »scientific reference area«, which will most likely be a no go area for everybody except a few scientists selected by the administration.
Zone B: No traffic during the breeding season.
Zone C: specific site-specific guidelines
Zone D: local bans on traffic at cultural heritage sites, in force since 2010
Zone E: Kong Karls Land (already off limits)