The early years of Barentsburg, Colesbukta/Grumant and Pyramiden 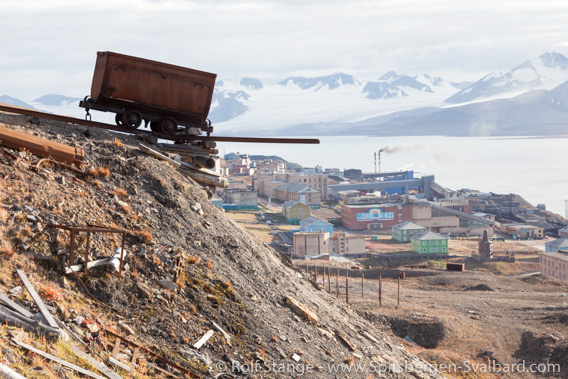 Barentsburg (2009). Russian companies have been mining coal here (including Heerodden/”Kapp Heer”) since 1932, interrupted only from 1941 to 1946 by the war.
The historical roots of Russian coal mining in Spitsbergen, however, go back to 1912.

Next to the Norwegians, the Russians are the only ones who have been active with coal mining throughout most of the 20th century and until today. Surprisingly little knowledge is publically available, however, about the early history of Barentsburg, Colesbukta, Grumantbyen and Pyramiden.

On this site I want to make an attempt to summarize the beginning of Russian mining in Spitsbergen briefly. These early activities were the base for today’s Russian settlements, Barentsburg and Pyramiden, as well as Colesbukta and Grumant. The latter two ones should be considered one double settlement rather than two functionally independent ones. Colesbukta and Grumant were abandoned in the late 1960s. There are individual pages with information and photos (mostly panoramic) for all of these places. 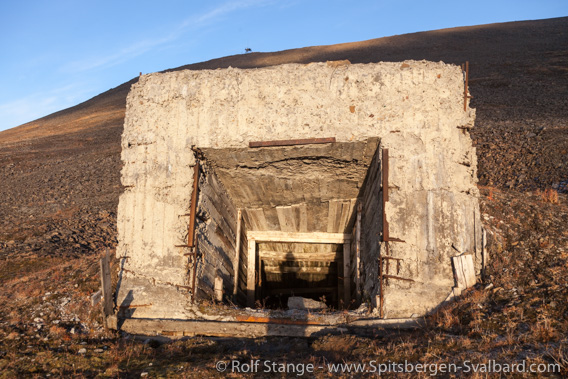 Mine entrance or ventilation shaft near Barentsburg.

Coal and other mineral occurrences of economical interest were found in Spitsbergen in the late 19th century mainly by Swedish geologists. Word soon spread to Russia, where the demand for energy for the evolving northen coast and was growing. The area did not have any resources in terms of primary energy and long distance overland transport was expensive and troublesome (obviously, nothing was known about oil and gas on the Russian continental shelf in the Arctic back then). Another issue was the Russian navy fleet in the Baltic Sea, which was dependent on English coal – not at all a desireable situation from a Russian perspective. Altogether, there was a solid base for the Russian interest for an independent source for coal somewhere north.

Merchants in Arkhangelsk equipped an expedition to the Arctic led by Vladimir Alexandrovitsj Rusanov in 1912. Amongst the members was a mining engineer named Rudolf Lasarewitsch Samoilowitsch. Samoilowitsch was later to become a leading arctic explorer and geologist in Russian. His activities led to the foundation of the Arctic and Antarctic Research Institute in St. Petersburg in 1920. His role reminds of Adolf Hoel in Norwegian arctic circles at the same time. 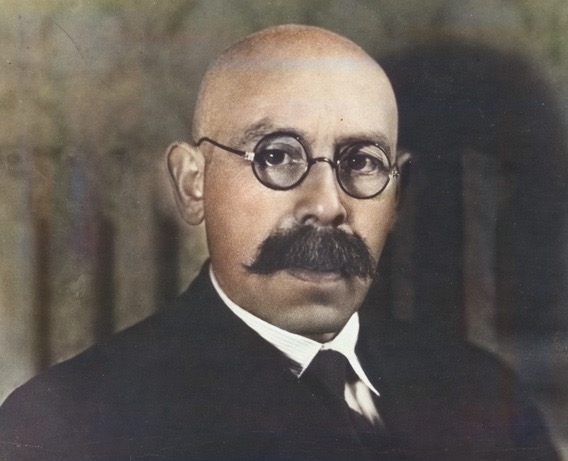 In 1937, Samoilowitsch was involved in a large expedition with several ships in the Russian arctic. The ships got unexpectedly stuck in ice and had to winter. This included the large icebreakers Sadko, Malygin and Sedow as well as a number of smaller ships. Samoilowitsch got the blame for the unfortunate development. Upon his return, he was arrested and he was murdered under arrest in 1939 or 1940.

The Russian Expedition to Spitsbergen in 1912

Back to the expedition to Spitsbergen in 1912. The scientists were supposed to map coal occurrences, to secure promising coal fields and to get an overview of already ongoing mining activities. Additionally, general research in classical fields such as botany, zoology and hydrography was to be carried out as much as possible.

The expedition had 14 members. They left Alexandrovsk on the Kola Peninsula on 26 June 1912 on the engine-driven cutter Herkules. During the next weeks, the north side of Van Mijenfjord was investigated. Rusanov and two sailers made an overland expedition from there to the coast of Storfjord on the east side of Spitsbergen to investigate this area. Then, the expedition went to several areas in Isfjord, including Green Harbour (Grønfjord), Adventfjord, Skansbukta and Colesbukta. Claims were made on a narrow, north-south trending stripe of land between Colesbukta and Van Mijenfjord, and later, an area in Trygghamna and further west as well as the west side of Borebukta followed. Then, the expedition went on to do some work on Prins Karls Forland, in Kongsfjord and in Krossfjord.

The expedition finished field work in Spitsbergen on 18 August. Samoilowitsch and two other members returned to Norway on a Norwegian steamer. Rusanov and the others went on with the Herkules to continue in the northeast passage. There, the whole expedition disappeared. Rusanov, ten more men and the ship – all gone, never to be seen again, and with them, all results of their work in Spitsbergen other than those that Samoilowitsch had taken with him. 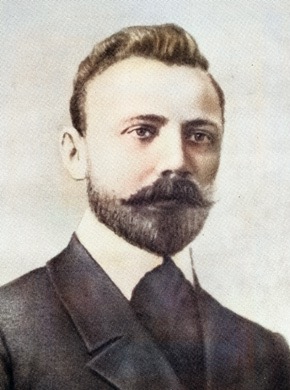 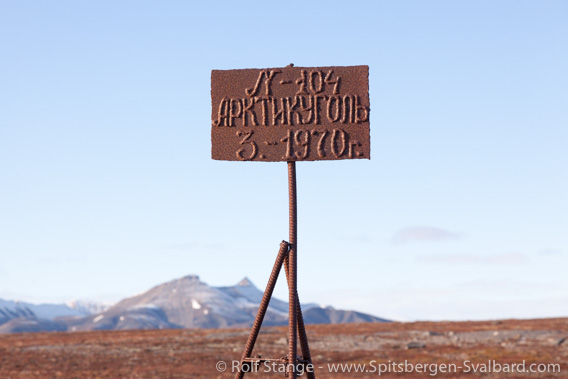 On 16 March 1913, the Arkhangels merchants behind the 1912 expedition founded the company Grumant – A.g. Agafeloff & Co, to which the claims in Spitsbergen were assigned.

Preparations for coal mining began in 1913 with an expedition with 25 men on two ships led by Samoilowitsch. The ships were the Maria (600 tons, Arkhangelsk) and the smaller Norwegian cutter Grumant. Samoilowitsch decided to establish a base on the east side of Colesbukta, where workers went ashore to start preparations for mining. Two houses were built, one for accommodation and one for storage, including the hut at Rusanovodden. 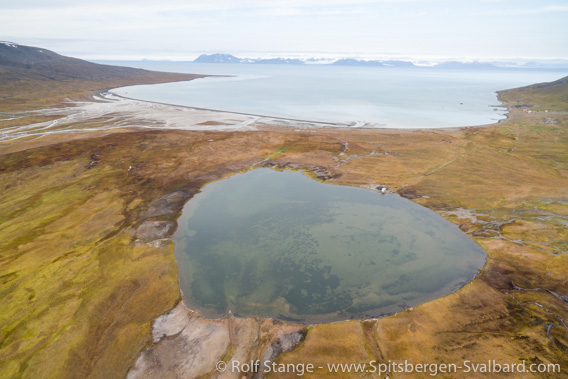 Colesbukta, where the Russian expeditions until 1915 had their base.

It turned out that the coal seam that had attracted the attention of Samoilowitsch was below sea level in Colesbukta, but another seam was found 60 m above the sea in “the second little valley east of Colesbukta”, namely Grumantdalen. Investigations were made there, during which 4 tons of coal samples were extracted.

While these works were going on, a rather unfriendly meeting took place between the Russians and the Americans from the Arctic Coal Company (ACC) in Longyear City (today Longyearbyen). John Munro Longyear himself and his deputy Scott Turner, a person not known to be afraid of entering conflicts, called Samoilowitsch a liar and laid down protest verbally and in writing as they considered the Russian activities an infringement of their own rights. In the end, the american protests got bogged down in international diplomacy and they finally came to nothing. 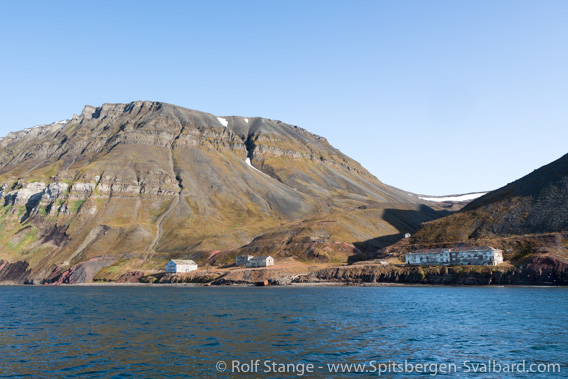 The Russian expedition left Spitsbergen in early September. Two men stayed behind to guard the Russian property in Colesbukta (Rusanovodden) during the winter. The wintering did, however, not go well: one of the men got scurvy. Far too late, they went to Longyear City for help. Despite medical treatment, the sick man died one day after their arrival, and the other one lost several toes and fingers due to heavy frostbite. He stayed with the Americans for several months.

Investigations were continued in Colesbukta and Grumant in 1914 and 1915, but no further details are known about these expeditions. It seems that the work was done by two men led by Samoilowitsch. These expeditions were the last ones from Russia for a while, because the first world war started in 1914 and the 1917 revolution in Russia.

The development after the first world war until 1932

The first world war did not touch Spitsbergen directly. But it did have implications of local importance, as several companies including the Russian Grumant – A.g. Agafeloff & Co withdraw from Spitsbergen. After the war, the price increase for coal on the world market led to a phase of renewed activity in coal mining also in Spitsbergen in the early 1920s. 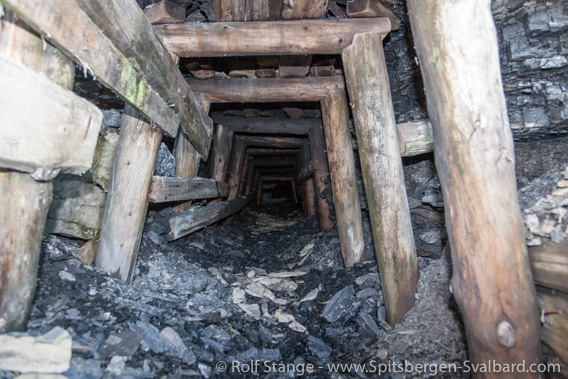 Old mine entrance on Bohemanflya.

But not much happened on the Russian side for a while. Green Harbour/Barentsburg and Rijpsburg (Bohemanneset/Bohemanflya) were founded and developed by the Dutch NeSpiCo (Nederlandsche Spitsbergen Compagnie). In Grumant, the Anglo Russian Grumant (ARG) established mining activities and a Swedish company started in Pyramiden.

There are individual pages dedicated to each of these places:

In 1931, the Russian mining installations and claims were taken over by the state-owned Trust Arktikugol. Briefly, a company named Sojusljesprom surfaced as a temporary owner, but this company does not appeared to have been a real player in this context. From 1932 and until today, the Trust Arktikugol owns and operates the Russian settlements and properties in Spitsbergen. Refer to the pages linked above for the further history of the invidual places.

Good sources for the Russian settlements and associated mining and other history in Spitsbergen is scarce, to put it mildly. Once I was pleased to finally find a newly published book about the Russian history of Spitsbergen – just to realise quickly that it was a Russian translation of the Norwegian standard book Svalbards Historie by Thor Bjørn Arlov. This is a modern standard textbook, but one of its shortcomings is exactly the focus on the Norwegian perspective and a lack of material on the Russian side (of course there is some information about the Russians included, but it leaves a lot to be desired in this respect).

It is amazing that a Norwegian book was translated into Russian instead of the publication of an original Russian work. It is hard to believe there there is no dedicated historian in Russian arctic circles, which are strong and active, both capable of and motivated and in a position to compile a history of Spitsbergen (Grumant) from a Russian perspective. This would be the Spitsbergen book that is still missing, and I still hope that it will be written and published one day. This would be something for a historian with good language skills, good contacts in political, scientific and mining circles and access to relevant archives. Or is that asking for too much?

As long as such a book does not exist, we will have to make do with Adolf Hoel’s Svalbards historie 1596-1965. Which is an amazing piece of work with a great wealth of information, so we should be glad to have it, but – please, anyone with relevant skills and abilities, just go ahead … 🙂