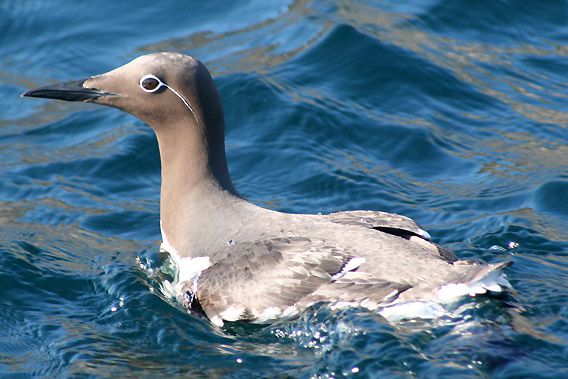 Distribution/Migrations: The common guillemot does not breed in Spitsbergen, apart from a few small occurrences in Bellsund and at the northern tip of Prins Karls Forland. The northernmost large colonies are on Bjørnøya where Common and Brünich’s guillemots breed in mixed colonies with hundreds of thousands of breeding pairs of each species. The Common guillemot thus tends to inhabit more sub-arctic areas, but is also found everywhere at higher latitudes and is one of the most numerous seabirds of the North. Probably spending the winter in open waters largely in the region of the breeding colonies, they are not very migrative. Common guillemots breeding in the northernmost parts of the species’ range move a few hundred kilometres south towards the Norwegian coast.

Biology: Common guillemots are seabirds, which means that they spend all of their life at sea without coming to land, except in the breeding season. Their menu is more specialised than that of the Brünich’s guillemot and comprises mostly fish which they catch at depths between 20 and 30 metres, exceptionally even beyond 100 metres.

The steeper and denser the colony site, the better the breeding success of the Common guillemot. One reason for this is protection against predators such as Arctic foxes and Glaucous gulls. The breeding cycle is very similar to the Brünich’s guillemot. A single, pear-shaped egg is laid in late May or early June. Both parents sit for 32 days and take part in foraging for the chick for another three weeks until, still unable to fly, the chick has to jump from the cliff into the water or, if necessary, down onto the tundra. Many young birds die during this hazardous operation or fall victim to Arctic foxes. To reduce the risk, the breeding cycle is largely synchronized within a colony: The more chicks walking over the tundra at the same time, the smaller the risk for the individual bird to end up as fox food.

Miscellaneous: In 1987, the Common guillemots’ colonies on Bjørnøya collapsed by 85 %. Out of approximately 245,000 breeding pairs from the year before, only 36,000 returned to breed. The Brünich’s guillemot, which breeds at the same colonies in comparable numbers, was not affected. The reason was overfishing and thus a depletion of the food resources of the Common guillemot, whereas the Brünichs were better off because of their more varied diet. Since then, the breeding population of Common guillemots on Bjørnøya is recovering, but has not yet reached its original size.