The polar bear that has attacked the English camp in Tempelfjord, leaving one 17-year young man dead and several ones injured, was an old, mal-nutrioned animal that suffered from severe toothache. According to specialists, it is unknown if pain makes bears more aggressive but it is safe to assume that starving bears are likely to be more dangerous than well-fed ones.

What is known is that all technical safety means failed to work in Tempelfjord: The alarm fence did not trigger, and both signal pistol and rifle failed as well.

The issue of the alarm fence has been matter of debate for some time, regarding both reliablity and availability. The best system is of military origin, but soon out of stock in Longyearbyen. Retailers and Sysselmannen have tried to get access to more supplies, but so far without success.

The question is why the rifle failed during the first four attempts to fire it. One option is incorrect handling of the safety pin. Next to the positions »safe« and »fire«, rifles of the type Mauser, as the one used in Tempelfjord, have a third position, which allows to repeat, but not to fire. If the safety pin was accidentally in this position, then any attempt to fire and repeat would only result in emptying the magasine without actually firing, as happened in the camp. If this is the reason for what happened, is at the present time speculative.

Only when an already injured group leader managed to find one of the cartridges on the ground and re-loaded the rifle, he managed to shoot the bear with one shot from a close distance, thus preventing even greater damage. 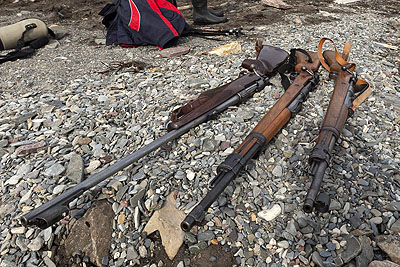 The fatal attack of a polar bear that led to the death of a 17-year old on Friday (August 05) took place in the early morning hours while the group was still asleep, thus coming as a total surprise. The very aggressive bear attacked a tent (several ones?), killing one person and injuring another four, two out of these seriously in the face.

Next to shock and the sadness about the loss of a person, the question of how the deadly attack could happen remains to be answered. We need to wait until further details will be published before final conclusions can be drawn regarding the situation and its implications for risk assessment and safety measures.

Generally speaking, when camping in polar bear country it is important:

Camping in polar bear country. The risk of a potentially dangerous polar bear visit can be minimized, but never reduced to absolute zero. 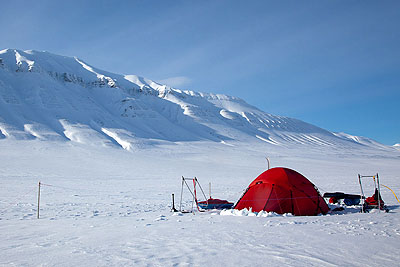 P.S. last official statements confirm that the alarm mines did not explode when the polar bear entered the camp. So far, the reason for this is unknown.

In the early morning of August 05, there has been a tragical polar bear attack on a group of people in Tempelfjord. For the first time since 1996, a person was killed, another four were injured. The injured people are between 16 and 29 years old, the killed person was 17 years young. The injured ones are in medical treatment in Tromsø.

The polar bear was shot.

Further details are not yet known.