Red-throated divers are beautiful, elegant birds, and the sight of a Red-throated diver next to a romantic little lake in the tundra is a great experience. You might hear its cat-like call, before you see it. 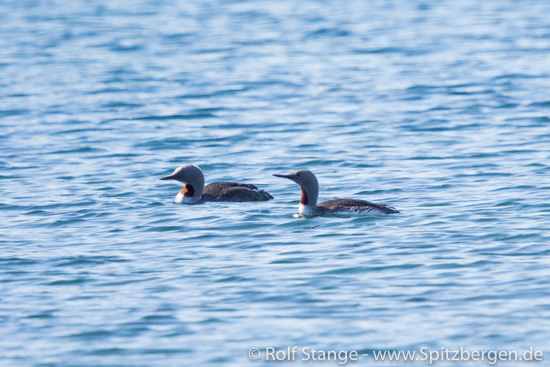 Red-throated divers have a red spot at the throat.

Description: Sea diver, that reminds one of a large duck both in flight and on the water. There are four species of sea divers worldwide. The Red- throated diver is the smallest, being 53-69 cm long and weighing 1.500-1.700 g, and is the only sea diver breeding in Spitsbergen, apart from the Great Northern diver of which a few single pairs are breeding on Bjørnøya in the far south. Their long, pointed, slightly down-bent beak is characteristic, together with the brownish-red throat and the grey head. Male and female birds look the same. In flight the long slim neck is slightly bent downwards, which gives these divers a very specific silhouette. Typical observations are either in flight or near small freshwater lakes in the tundra or sitting on the water where they will quickly retreat if anything is coming close. Red-throated divers float deep in the water and have a very elegant outline, that is always bent a little forward. When walking, which the bird will only do if necessary, it looks rather clumsy as the legs are far back under the body. Red-throated divers call frequently when in flight; their monotonous calls carry a long way.

Distribution / Migrations: The Red throated diver has a circumpolar distribution in the Arctic and sub-Arctic down into the boreal zone. In Svalbard, they are most common on the west coast of Spitsbergen, in the southeast (Tusenøyane) and on Bjørnøya. They come to their breeding grounds in May or June and spend a long summer in the North, well into September or even October. Then, they move south, into coastal waters anywhere from Norway to the Mediterranean.

Biology: Pairs usually breed on their own; only occasionally will you see several pairs of Red-throated divers close to each other. Usually they build their nests on flat tundra on the shores of small lakes; occasionally also on little islands within such waters. In late June or early July, as soon as the lake near the nest is free of ice, the female will lay one to three eggs (normally two). Both parents take part in the 26-28 days of incubating, and in feeding the chick(s) until they become independent after six to seven weeks.

Being good divers, as the name suggests, they find their food in the sea: They live mostly on small fish, but will additionally take plant pieces and invertebrates (mostly insects) on shore. 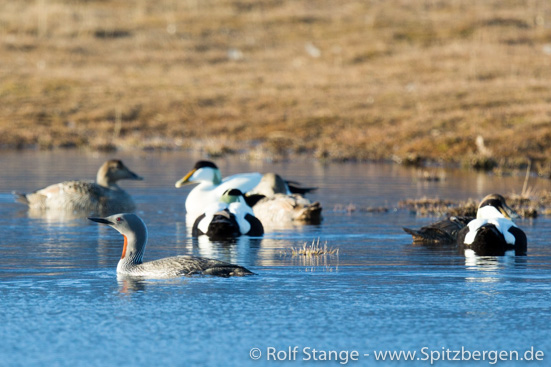 Red-throated diver (in front) and Eiders in the background

Miscellaneous: The regional population size is unknown, but it will not be large. Red-throated divers are very shy and will leave the nest quickly as soon as they see somebody, even at a distance of 100 or 200 metres; eggs and chicks will then cool down or fall victim to an Arctic fox, Great skua or Glaucous gull. Thus great care is needed. Keep a good distance away and be aware of your silhouette when you walk over the hills, suddenly appearing in a Red-throated diver’s view.

For good photos, you will need a very good telephoto lens, a tripod and you should be on your own and have a lot of time – or you have to be very quick when they are flying over you.