The Norwegian mining company Store Norske is investigating gold occurrences in Spitsbergen, as reported earlier on these pages. The area of investigation is the south side of St. Jonsfjord on the west coast, north of Isfjord. Four cores have been drilled on Holmesletfjella, 500 metres high; 4000 metres of cores are supposed to be drilled until June. The area of interest stretches across 7 kilometres, and several years of further research work are needed until any mining can possibly be started. 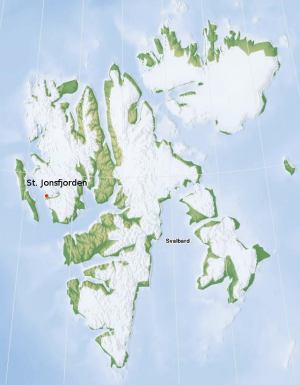 Single-handed flight across the North Pole

On 05 April, the French adventurer Jean-Louis Etienne ventured on a balloon flight from Longyearbyen to the North Pole. He almost succeeded in reaching 90°N, but was then blown off at 88°N towards Russia.

Etienne carried instruments to measure carbondioxide levels and magnetism. His first solo expedition to the North Pole was on ski in 1986. This time, he wanted to focus on observations of changes in the high Arctic. On 10 April, after 121 hours and 3130 kilometres, he landed in Jakutia (Russia).

The volcano at the Eyjafjalla-glacier in Iceland gives Spitsbergen some of the remoteness back that it used to have in the past. The recent concentration of ash particles in the atmosphere above Norway forced planes from and to Longyearbyen to remain on the ground, meaning that Spitsbergen was cut off not only for human traffic, but also for food and other deliveries, mail and medical emergency flights. The coast guard was on standby in case of urgent medical evacuations. After two days, the first tourists were flown out of Longyearbyen to Tromsø.