Virgohamna as a virtual Panorama tour 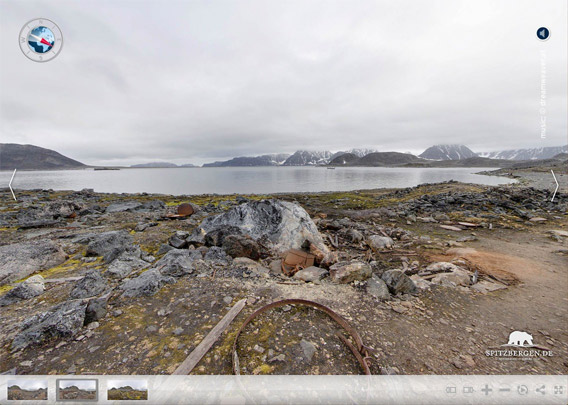 The American journalist Walter Wellman had the plan to reach the North Pole to create the biggest possible sensation for his newspaper, the Chicago Record Herald. Previous attempts with strenuous sledge journey over the pack ice from north Spitsbergen (1894) and Franz Josef Land (1898-99) had all failed. So did Wellman’s first attempt from Virgohamna on Danskøya in 1906 with the airship America despite considerable costly preparations.

For his second attempt in 1907, Wellman could make use of hut and hangar from the year before. But he did not get further away than approximately 24 kilometres until the airship crashed on Fuglepyntebreen, a little glacier further northeast on the coast of Spitsbergen. Wellman and his crew survived and were taken back to Virgohamna.

Probably it took Wellman more time to convince his sponsors again, as he did not return before 1909. His airship America flew about 40 miles north of Spitsbergen before it crashed onto the sea ice. Wellman and his crew were rescued – again – practically without injuries. He abandoned any plan for further attempts when he heard that his fellow countryman Robert Peary claimed to have reached the North Pole.

Wellman is a controversial figure, and his seriousity was questioned by Fridtjof Nansen and many others. But he certainly had a good feeling for technological developments; he might have made it with some more accuracy, or maybe just that little bit of luck that any explorer needed to be successful.