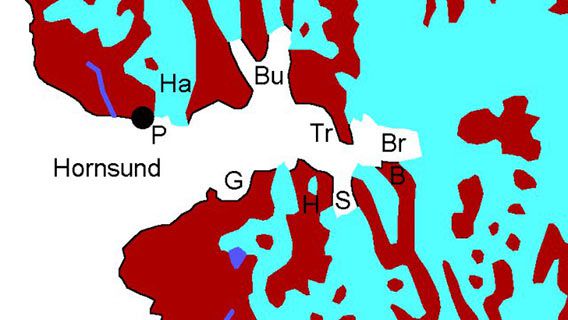 General: The most beautiful fjord in Spitsbergen (as Bellsund, Isfjord, St. Jonsfjord, Kongsfjord, Smeerenburgfjord, Liefdefjord etc. ) and definitely the southernmost one. Great scenery! The Hornsund cuts approximately 25 kilometres deep into the island. 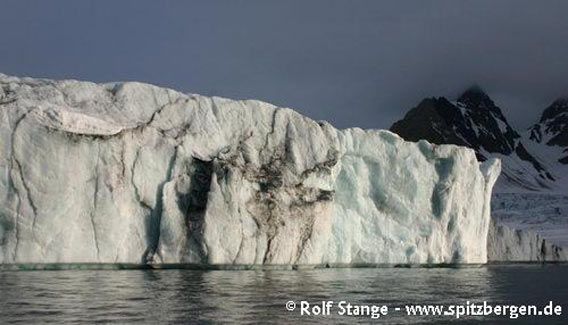 Seemingly paradox, there is more drift ice in the Hornsund than further north at the west coast. This is due to a cold current which comes from the northeast on the eastern side of Svalbard and then around the south cape and up the west coast. It brings a lot of ice to the southern part of the west coast, so the Hornsund is usually blocked with ice in the early summer, even if the other fjords further north are already ice-free. It also brings a lot of cold, polar watermasses into the Hornsund, which stays in the inner part of the fjord, thus providing a high-polar marine ecosystem in direct neighbourhood to the more subarctic waters influenced by the gulf stream. This provides for an interesting faunal cross-section from subarctic to high arctic within a small area (nothing people like you and me would ever get to see. But people like Rupert, if you know him, put some small, slimy things under the microscope and can tell you an amazing lot about it).

The sedimentary cover rocks start on the eastern side of Burgerbukta and Samarinvågen. On the northern side, it starts with Devonian conglomerates and sandstones (‘Old Red’), followed by the prominent Kapp Starostin Formation with its hard, fossil-rich limestones. They are dipping vertically, similar to the situation in the Bellsund, forming conspicuous peninsula (Treskelen) and mountains. Bautaen is quite spectacular: grinded down by glacial erosion from both sides, it looks as a needle, if you look from the right perspective, and is thus almost as striking as the Hornsundtind with its 1431 m, despite its lower height. 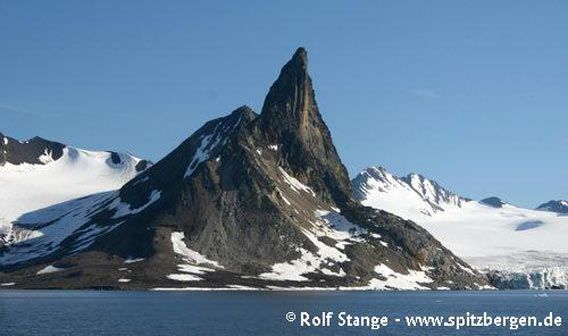 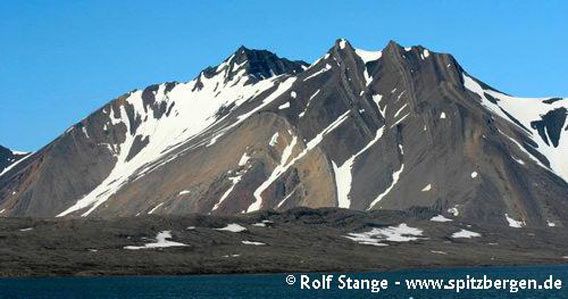 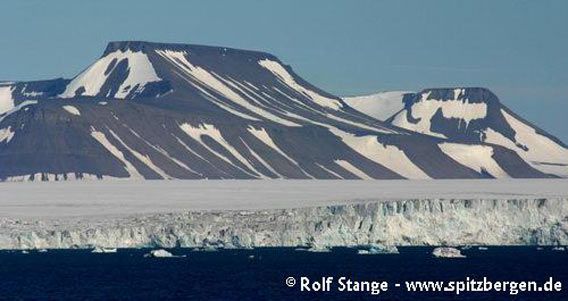 The central and inner parts of the Hornsund are strongly glaciated, so there are almost no tundra areas there. There are almost vertical rockwalls and wild mountains around Burgerbukta and Samarinvågen. West of Samarinvågen, the mighty Hornsundtind is towering over the fjord with its 1431 metres, but you need quite a bit of luck with the weather to see it form tip to toe. There are glaciers calving into all side bays, so there is often a lot of ice on the water; icebergs, growlers and bergy bits, as the whalers used to call small pieces of ice. 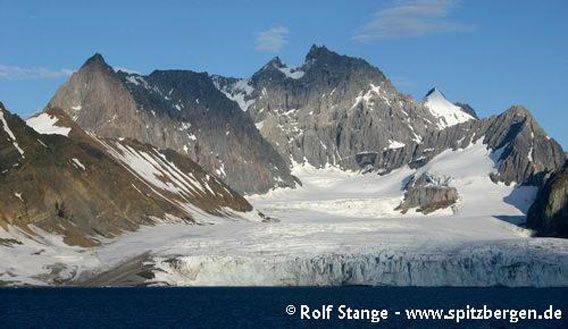 Brepollen, the innermost part of the Hornsund, is almost completely surrounded with glaciers. Because of the general, well-known retreat of glaciers also in Spitsbergen, which is very pronounced in the Brepollen, there are more and more moraines visible at the coast, to a larger degree than indicated on the scetch map above. 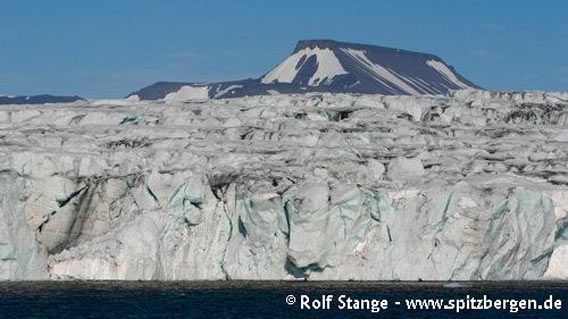 Flora and Fauna: Because of the topography, there are few tundra areas, but the vegetation can be very colourful near bird colonies. Here, you can find reindeer, fox, geese etc. The Hornsund is well-known for its large colonies of Little auks (Alle alle), there are hundreds of thousands of them breeding in the Hornsund; most of Svalbard’s Little auks breed either here or in the northwest of Spitsbergen. Little auks breed under large bolders, which means that you can’t see the nest itself. The breeding sites are ususally inaccessible due to the steep and rocky terrain, and in other locations such as near the Polish station, there are sometimes research projects going on, which means these sites can be off limits for tourists. 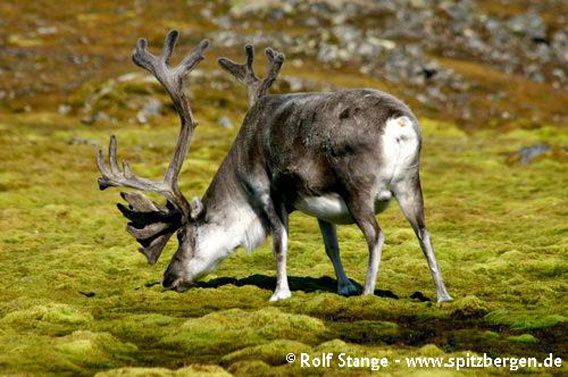 Reindeer enjoying rich vegetation under a colony of Little Auks in the Hornsund.

History: Long and quite interesting. Similar to the Bellsund, it was amongst the first fjords which was discovered by whalers in the 17th century. The Hornsund got its name from Jonas Poole, an English whaler, after some of his men had found a piece of reindeer antler there. It is possible that Poole believed that the Hornsund was actually a strait through which it was possible to sail to the east coast of Spitsbergen, so he called it ‘Horne Sound’ and not ‘Horne Bay’ or similar. There are remains of blubber ovns and graves visible at several locations. Also the Pomors have used the Hornsund for hunting purposes. 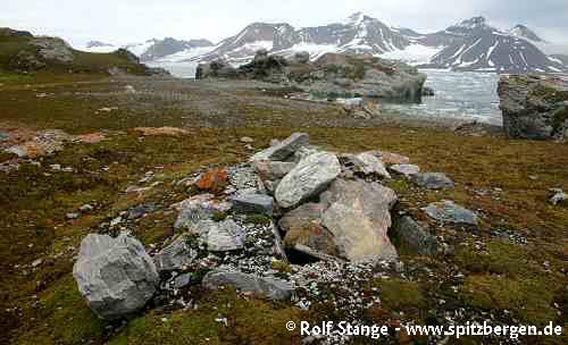 Whaler’s grave in the Hornsund.

Amongst the expeditions which have visited the Hornsund, for example the one of the Austrian-Hungarian Count Hans Wilczek in 1872 can be mentioned. Wilczek was an important sponsor of polar expeditions such as the ‘Tegethoff’ expedition with Karl Weyprecht and Julius Payer, during which Franz Josef Land was discovered. The bay Isbjørnhamna on the northern side of the Hornsund is named after Wilczek’s ship, the ‘Isbjørn’, which Wilczek used to accompany the ‘Tegethoff’ for a while in the Barents Sea. After they had separated near Novaya Zemlya, Wilczek sailed further to Spitsbergen and visited the Hornsund. Also Wilczekodden on the west side of Isbjørnhamna is named after him, as is Hansbreen further to the east. 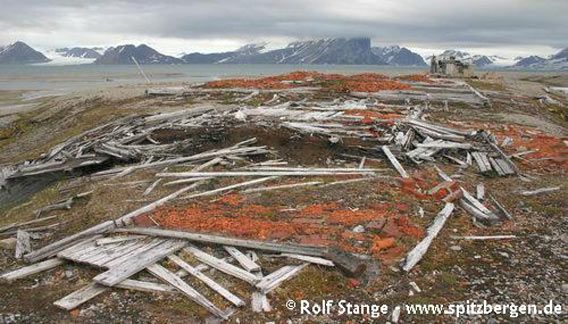 Remains of the station of the Arc-de-Meridian expedition in Gåshamna. 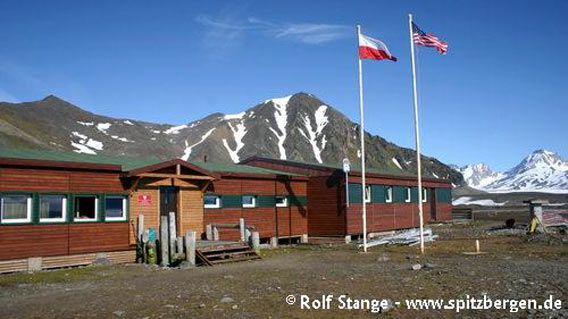 Polish research station in the Hornsund.

The first successful ascent of the Hornsundtind was achieved by the German climbing expedition of Dr. Rieche in 1938. The Hornsundtind is technically much more demanding than the two highest mountains of Spitsbergen, Newtontoppen and Perriertoppen, in the northeast.