The ongoing, controversial process of a new management plan for East Svalbard seems to reach its final stages, as the Sysselmannen has on January 09 published his latest and most likely final proposal, which has already been sent to the Directorate for Nature Administration (DN) with the Environmental Ministry in Oslo for further bureaucratic treatment before it can be turned into valid law by the parliament.

The assessment within the DN is, however, anything but formality: the whole process failed already once years ago, when the Sysselmannen turned down the original proposal from Oslo as too drastic and lacking sufficient, knowledge-based foundation. In the following, the bureaucracy in Oslo made it clear where the competency to shape the new law really is: not in Longyearbyen. The same will most likely apply to future handling of some of the administration of East Svalbard, something that may be decisive in practice. The Sysselmannen, who is – as an institution – still believed to have his feet on the ground of reality at least to some degree, is apparently too soft in the eyes of the hardliners in Oslo, who care little about environmental or scientific benefit of their legislation as long as the public is largely being out of areas they consider their own playgrounds (in this context, it is interesting to have a look the legislation that is in force on Jan Mayen since 2010).

The current proposal is still largely driven by ideology rather than arguments seeking for real environmental or scientific benefits, but at least less dramatic than older versions which frankly suggested to close the whole thing mostly down, except from a few selected locations – still annoying but for most probably not the end of the world, in other words. According to the current proposal, East Svalbard is to be divided into 6 different zones, some covering large areas, others smaller locations, with different regulations for all of them (see map further down):

Zone A (yellow): “Scientific reference areas”. Anyone who wants to travel there needs to notify the Sysselmannen first, who can require changes of plans or stop them altogether. Comment: the DN is likely to demand this power for themselves. One can only guess what this would mean in practice for those who wish to travel there. The result might as well come close to a complete closure of the areas in question, which are large, although mostly (but not completely) irrelevant for tourism. The scientific need for and value of such reference areas is very controversial, no solid arguments that support such a need or value have been put forward, a fact that did not keep DN and other interested parties from declaring that such areas are necessary. By the way, an obligation to apply for permission to travel in the East Svalbard Nature Reserves – which cover the proposed reference areas and far more – is already in force and has been so for many years. One might wonder what the change will really be.

Zone B (orange): No admission between May 15 and August 15. This means in practice a closure of Lågøya and Tusenøyane for most of the relevant season. A similar regulation is already in force for the bird reserves, but these are restricted to smaller areas and locations, mostly the actual breeding colonies on smaller islands, rather than larger islands and whole island groups.

Zone C (green dots): site-specific regulations are to apply. This is a procedure which is getting increasingly common for polar tourism, for example in Antarctica.

Zone D (red dots): smaller areas around cultural heritage sites that are closed completely year round. In force since 2010.

Zone E (red): This is Kong Karls Land. No admission around the year. In force since many years ago. 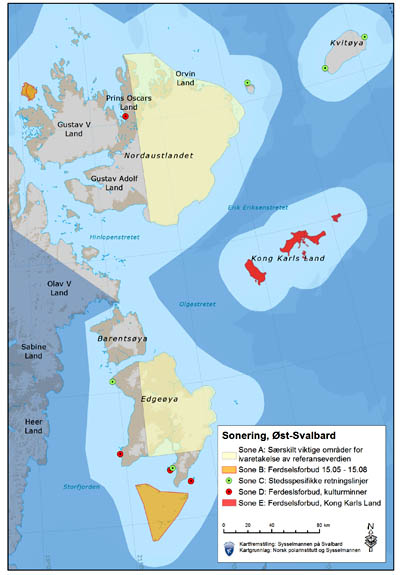 Click here for a larger version of this map.

It is worth noticing that competences of the Sysselmannen to close smaller areas within the Nature Reserves for any reason are to be moved to the DN in Oslo and widened to the option to close also larger areas. This implies a danger that the DN can, in practice, still close large parts of the Nature Reserves by decree, without any further legal process and public discussions connected to it. It also shows the distrust of the Oslo bureaucracy to the Sysselmannen, who is often “too kind” in the perspective from Oslo offices. Others would say the Sysselmannen has still some idea what is really going on on the ground in Svalbard. It remains an interesting question why the Sysselmannen himself has written this into his proposal, rather than leaving it up to the DN.

According to the current proposal, Lågøya is amongst the areas which will be off limits between May 15 and August 15. 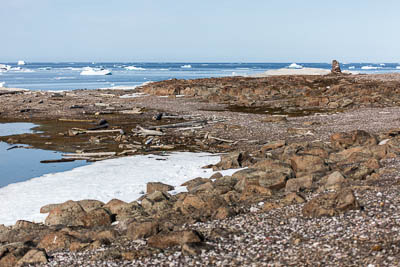 Advanced Antarctica: with MV Ortelius to the Ross Sea

The Ross Sea is a remote part of a remote continent: Antarctica. Most tourist voyages visit the Antarctic Peninsula, whereas the Ross Sea area seldom sees cruise ships. You may call it “Antarctica for advanced learners”: For “beginners”, it means mainly a long, expensiv ship journey over often stormy seas. But for those who know more about it, it can be a dream of a lifetime to sail there in the wake of Scott, Amundsen and Shackleton (who was there before he famous Endurance-expedition).

“Beginners” do not need to read any further, but “advanced learners” who can make such a voyage on relatively short notice have now got an (almost) affordable opportunity to join an expedition to the Ross Sea with MV Ortelius, as the owner company Oceanwide Expeditions is offering attractive discounts for the voyage starting on February, 18, from New Zealand, and terminating March, 20, in Ushuaia (Argentina). For more information, please visit the website of Oceanwide Expeditions.

MV Ortelius in Antarctica. Additionally to the Zodiacs, the ship will also have 2 helicopters during the Ross Sea voyages. 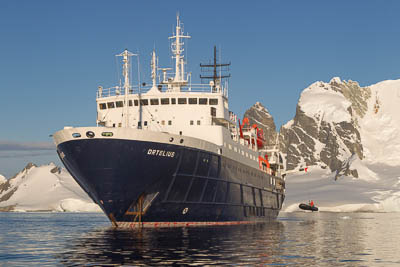 Final remark: this page is not used for advertising for any third party, and the owner does not receive any payment (neither direct nor indirect) for posting this note, but finds the voyage absolutely worth spreading the word here.

Environmental toxins lead to thinner eggshells for Ivory gulls. This is one key result of a recent study made by scientists from the Norwegian Polar Institute (NPI), the Russian Antarctic Research Institute (AARI) in St. Petersburg and others. Samples were taken in Svalbard and arctic Russia in 2007. Compared with data from the early 20th century, eggshells from Spitsbergen and the Russian arctic are up to 17 % thinner.

DDT was gradually banned in many countries from the early 1970s onwards and is now used legally only in relatively small quantities to fight diseases such as malaria. After an ban on DDT in Norway, eggshell thickness of seabirds and birds of prey recovered again back to natural values. 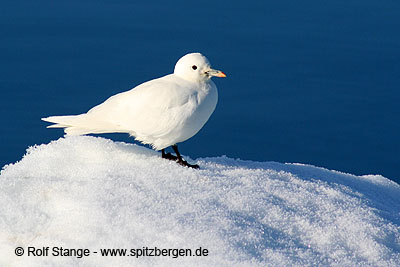 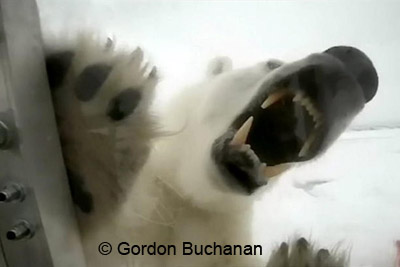 The Spitsbergen cruise with SV Antigua (the “glacier trip”) has already been documented on this site (click here to see photos and triplog). Meanwhile, 2 more photo-documentations have been created and are available online. Both feature impressive photography:

Alexander Lembke is professional photographer and joined us (again) as guide on this tour. He has published a very enjoyable slideshow on his website. On the same website, you will also find artistically impressive photo galleries of other expeditions in Spitsbergen.

Harald and Andrea Dessl have compiled a whole photo book with their material from the voyage in September 2012, which can be seen completely online (click here). A print version can also be ordered.

The photobook made by Harald and Andrea Dessl. 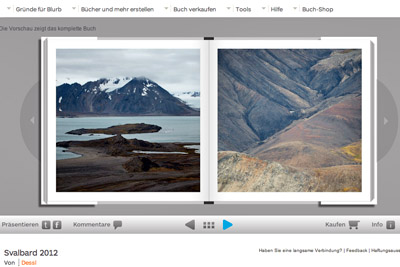 First of all: Happy New Year to all visitors to this site! Unfortunately, the first news for 2013 are sad ones: A walrus that showed up as a surprise guest in Dalabukta near Kristiansund, west of Trondheim on the coast of Norway, was shot by the authorities after a few hours. The reason was said to be the bad health status of the animal.

According to witnesses, the walrus was in good condition regarding at least the nutrition status. As far as can be seen on photos, the animals seems to have been in good shape. Small injuries including broken tusks are normal for walrusses. The decision to shoot the animal, taken within a very few hours and without consulting experts, is met with substantial criticism and has now been reported to the police. Walrusses are protected since 1953.

It is quite rare, but not unheard of, that individual walrusses take long trips from their high arctic home waters south to the coasts of Norway or even Denmark or Spain during winter.

The walrus in Dalabukta near Kristiansund, January 01, 2013. The animal was shot after only a few hours by local authorities. Foto © Sindre Sverdrup Strand, tk.no 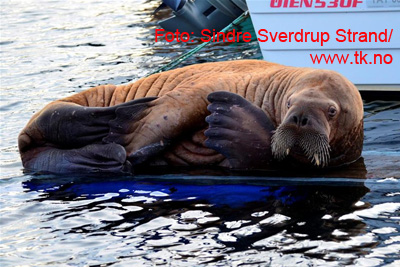