After a long and rather controversial discussion, Norwegian authorities have decided to declare 8 historical sites in the Spitsbergen archipelago off limits, starting 01 January 2010.

For more details such as a map of the sites, see, Sysselmannen.

It has also been decided to ban the use of heavy (crude) oil in the three largest National Parks in Spitsbergen. Heavy oil is a common fuel type for large ships, but is very dangerous for the environment in case of accidents.

As exceptions, it can still be used until 01 January 2015 on the shortest safe routes to Sveagruva, Ny Ålesund and into Magdalenefjord.

A similar ban is in force since 2007 in the large Nature Reserves in eastern parts of the archipelago.

This part of the new regulations is welcomed by conservation groups.

Tourists carefully visit a whaler’s grave from the 17th century at Likneset in northwestern Spitsbergen.
This will not be possible anymore in the future, starting 01 January 2010. 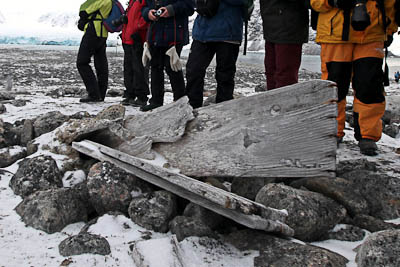