Home → * News and Stories → Military use of SvalSat?

Military use of SvalSat?

The Spitsbergen treaty (often called “Svalbard treaty”) does not allow military facilities in Svalbard. It has often been a matter of debate what is actually to be considered a “military facility”, but permanent installations may clearly not serve military purposes.

The Norwegian author Bård Wormdal has now claimed in a new book that the satellite antennas of SvalSat on Platåberg near Longyearbyen are regularly used to download data from military satellites. Wormdal wrote this happened, amongst others, during the NATO operations in Libya. This would be a clear violation of the rules of the Spitsbergen treaty, which is still in force.

SvalSat is a system of satellite antennas to download data from satellites in polar orbits. The 7 antennas are owned by Kongsberg Satellite Services who is responsible for the overall operation, EUMETSAT, NASA and the American weather service. Services such as GPS and the future European equivalent Galileo also buy capacities.

SvalSat on Platåberg near Longyearbyen: Civil or “dual use”?. 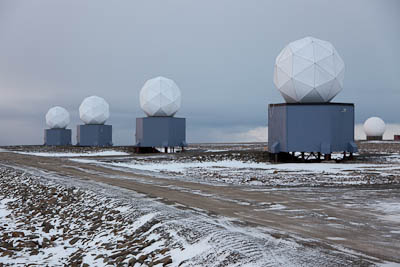