Home → * News and Stories → May 17th: Norwegian Constitution Day is also celebrated in the Arctic

May 17th: Norwegian Constitution Day is also celebrated in the Arctic

May 17th is the National Day of Norway. On this day Norwegians celebrate the Norwegian Constitution which was adopted on May 17th in 1814 by the recently established Constituent Assembly at the small place of Eidsvoll in southern Norway. A considerable act for the country and courageous as well, as Norway before was governed by the Danish crown for almost 300 years. Officially Norway was part of the Danish kingdom, the important positions were held by Danes and by the impact of culture- and school-politics Norwegians should become Danish.

In 1814, at the end of the Napoleonic Wars, as the territorial reorganization of the Scandinavian countries was negotiated in the Treaty of Kiel, the Norwegians took the opportunity: They established a national assembly, gave themselves a constitution and elected an own king. Yet, it did not work that easy. Norway was pressed into a union with Sweden instead and the Swedish king also became king of Norway in personal union. But at least Norway was a separate kingdom again, the national assembly was transformed into a parliament (Storting) and the constitution, celebrated on May 17th, was maintained. Norway became completely independent in 1905 when the union with Sweden was suspended.

Traditionally the National Day is celebrated with a parade including music, lots of Norwegian flags and a diversity of traditional costumes from the different parts of the country. In the capital Oslo the parade moves along Karl Johans Gate and passes the Royal Palace. All over the country people raise the Norwegian flag.

In the Norwegian Arctic May 17th was celebrated as well, not only on Spitsbergen, in Longyearbyen, among the researchers in Ny Ålesund and in the mining settlement of Sveagruva, but also at the meteorological stations on the remote islands of Bjørnøya, Jan Mayen and Hopen. Even the crew of the research vessel RV ´Lance´, frozen in the ice north of Spitsbergen, organized a parade: across the ice, once around the ship. Afterwards there was a party onboard. The station on Bjørnøya was visited by the crew of the coastguard vessel KV ´Harstad´, increasing the number of participants at the parade significantly. It is also said, that they could win some new members for the Bjørnøya Nude-Bathing-Association. The smallest May 17th celebration was held on Hopen. At least with 4 persons (and the 4 station dogs) all inhabitants were present.

The parade in Longyearbyen stops at the war memorial.
Photo: © RS 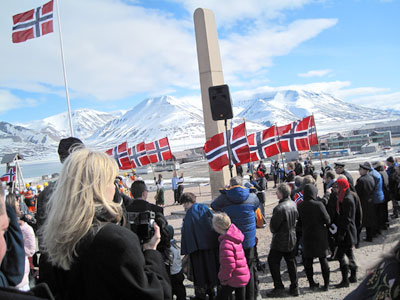 In Longyearbyen the parade moved from the church to the city center and further to the war memorial where flowers were laid down and speeches were held. The speakers were Robert Hermansen, former CEO of the mining company Store Norske Spitsbergen Kulkompani and the Russian Consul General in Barentsburg, Jurij Gribkov, who congratulated the Norwegians to the celebration of their Constitution. Afterwards the parade moved to the Svalbardhall where a meal was served and the celebration continued with several events, especially for the children. In his speech the Sysselmannen Odd Olsen Ingerø emphasized Norway´s sovereignty over Svalbard and confirmed the validity of the Spitsbergen Treaty.