Home → * News and Stories → Cruelty to polar bear in Russia

Cruelty to polar bear in Russia

I guess I have to warn you here: this is not for the faint-hearted. The story and a related video on youtube are disturbing.

There has been an extreme case of cruelty to a polar bear on Wrangel Island in the far eastern Russian arctic. A female polar bear accompanied by cubs had visited a construction site regularly. Appearently, she had become used to people, who fed her regularly. In November, a firecracker was mixed into the food and exploded in her mouth, heavily injuring the animal. A youtube video shows the bear moving around in great pain and losing blood. The firecracker is said to have been a military-type banger normally used for military education and training, containing 80 gram gunpowder.

The offender was the cook, who said later that it was an act of self defence, an attempt to divert the polar bear’s attention away from another nearby person. This is, however, unlikely to be true, according to local media, who report that the bear had been used to people and never showing aggressive behaviour. It is said that workers quite commonly photographed themselves together with this particular polar bear.

A video is circulating on youtube, showing how the polar bear is suffering from strong pain and bleeding severely. Information about the condition of the bear since is contradictory: there are statements that she is alive, but others say she has not been seen since.

Initially the offender seemed to get away with a symbolic fine, but since the case drew international attention on the web, politicians including Russian Environment Minister Sergej Donskoj and the governor of Chukotka have demanded investigations and a lawsuit. The Attorney General has taken up investigations, which may lead to imprisonment up to 3 or 7 years, depending on source.

A petition on thepetitionsite.com is supposed to increase pressure on Russian authorities to take strong steps.

The online petition does not contain disturbing images, but the above mentioned youtube video is tough stuff: cruel and disturbing. If you want to see it, then this is the link.

The offender was (is?) working for the company Русальянс (Russallians), which is contracted by the Russian Ministry of Defence. Officially, the company is supporting a foundation that is working for the arctic environment, including a “harmonic relationship between humans and animals”.

Screenshot of the youtube-video. 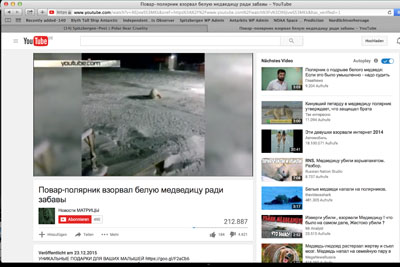