The sea monster (a plastic story)

992 kilos of garbage… and still a lot more. That is the title of a blog written by my colleague Birgit Lutz on her website (click here to get to her blog).

And still a lot more! That says it all. Pretty much everybody who has been with us on Antigua to Spitsbergen knows that we collect a lot of plastics on almost every trip. We are easily talking about several hundred kilos per trip, or several cubic metres, in other words.

Why “almost” every trip and not just every trip? Well, weather is one thing. When the ground is frozen or covered with snow, then it is such a thing with collecting plastics. But the main reason is that the distribition of the plastic litter is quite irregular. It is well known that some beaches are really waste dumps, and these are in many cases the remote ones, where few people ever get. That has to do with local currents.

Other beaches are quite clean. How much plastic litter have you seen in Kongsfjord, Krossfjord or Magdalenefjord? Probably not too much (of course there is some, it is everywhere!). But in Smeerenburg, virtually around the corner from the latter one, how many bigbags did we fill there over the years? No idea, I should have counted them. It was a lot, that’s for sure.

Yes, that is exactly what is coming on top of it: tourists are collecting plastic litter. Not all of them, but many ships in the fleet do join in this meaningful task, including the Oceanwide fleet and Antigua. We have been doing that for many years now. Not only since the administration officially started with the “Clean up Svalbard” programme. We don’t need to be encouraged by anyone to free the beaches from the plastics. Needless to say it is a great project, it gets more people to join in, but we are not blind, and it is such an obvious thing that the plastic litter needs to be removed from these beautiful arctic beaches!

And it is to a good effect. You should have seen Smeerenburg 15 years ago. A waste dump! Now it is reasonably clean again, as it is a place that is regularly visited and many people take their bit. On the other hand, every incoming wave brings more plastic litter.

So that is one of the lessons that we had to learn, and it was an obvious one. You can fight the plastic-problem on location, but you can not solve it there. Same as with climate change and the ozone depletion, these are global problems that need a global solution. It is for a reason that I have mentioned the ozone “hole” here, as it shows that the international community is actually able to deal with a global problem. If everybody joins and takes his or her share of the responsibility. Which is not even too much of a burden then!

Why is it actually a problem, beyond the visual aspect? Very simple: the plastic litter messes up the whole marine food chain and it is directly threatening countless animals. There is hardly a northern fulmar these days that does not have plastic in the stomach. Albatross chicks are dying from it in large numbers in some remote colonies. And these are just a few well-known examples. Most marine animals have got plastic in their system. It is colourful, it has the size of their food (whatever size that is – plastics have any size) and after a while it even smells good to those creatures, when it is overgrown by algae. So more and more animals have a stomach full of plastic and starve to death. As simple as that. And this is not “only” about the suffering and death of the individual animal, it is about the collapse of populations, food webs and ecosystems.

You can not overestimate the scale of the problem for marine ecosystems. To which we, as humans, also belong, by the way. Some more than others, but nobody can leave without the oceans. It would be our own dearest interest to get it sorted, the sooner the better. But that is not how we, as a global community, are, unfortunately. Too often, humans are more homo (human) than sapiens (wise).

Of course the countless animals that die a painful death, entangled in ropes and fishing nets, drowning or dying utterly painful when they keep growing inside a rigid net or rope, or starving to death at sea or on land, they are an everyday reality. The word “problem” almost seems to be sugarcoating this reality. It is a global catastrophy, nothing less. Just unseen by most people. 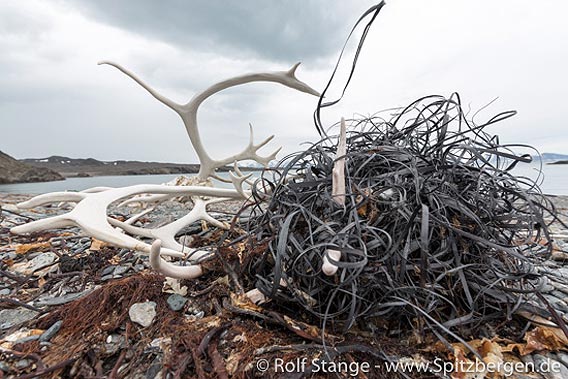 What was near this summer? A “citizen science” research project initiated by the Alfred Wegener Institute, that Birgit Lutz introduced on board good old Antigua and other ships. Many of our fellow guests and crew have made contributions by observing precisely how much plastic there was, what kinds of litter and where. At sea and on land. During the crossing from Norway to Spitsbergen and up north in arctic waters, a total of 18 so-called transects were made, passages at sea where each and every visible piece of litter was noted with position and all information you can think of. The research ship Polarstern collected corresponding data out at high sea in the north Atlantic.

During a number of trips on three ships (Antigua, Noorderlicht, Plancius), Birgit has documented 992.4 kg of plastic litter. The majority (927 kg) is material used in the fishing industry: old fishing nets, ropes, floatation balls, fenders, fish boxes. The rest was mostly packaging (55.69 kg) followed by empty bottles and arcticles of everyday use in the household. Results include some data on amounts of plastic litter on Spitsbergen’s beaches, which amount to 8-43 kg per 100 metres, a value roughly comparable to the North Sea where you have 10-345 kg per 100 m.

Check out Birgit’s blog for these and other details. Thank you very much, Birgit, for all your work on this! That takes the work that we – meaning a lot of people – have done for years up to a new, scientific level. Let’s hope it makes a contribution to knowledge and understanding, which will then hopefully result in global action on individual, society and political levels.

Next to reducing use of plastic, collecting litter in nature will keep us busy for a long time. We will continue doing that in Spitsbergen and wherever we have the chance. We would, by the way, love to do that on Jan Mayen as well, but here Norwegian law (allegedly made to protect nature!) sets a strong stopper. Well, that is another story. But other people take up the challenge of collecting plastic litter at the high seas. A very interesting, promising technique is developed by The Ocean Cleanup, a project that deserves support. Good thing!

Now I got carried a way a bit, but is important. I almost forgot to tell the story of the sea monster. This was my original intention 🙂 so the sea monster, that was a big fishing net that we found in early June 2016 on the coast of Reinsdyrflya in Woodfjord. It was so huge that it was directly clear to me that we would never be able to get it off the beach and on board. It would be better to leave it where it was, half buried in the sand. But I had not taken Birgit’s persistence into consideration. After we had done our excursions and collected the usual smaller bits and pieces of litter, she started to grab some volunteers and to pull and dig on the net. Admittedly, I thought quite some time that it would never work, while I took gloves, shovel and axe to do my bit. But how great can it be to be proven wrong! It took quite a few hours until we managed, with combined forces from passengers and crew of SV Antigua, to get the net out of the sand and towards the beach. Next to many hand, we involved 80 or 100 horses that were galloping in the outboard engines of our Zodiacs, pulling on the net from the sea. Already now it was clear that this thing would be remembered as the sea monster!

It was a beautiful moment when the Zodiacs actually dragged the net free from the beach and into deeper water. We had attached fenders to it to make sure it wouldn’t be lost in the deep, which would otherwise surely have happened very quickly. But now the fun was just about to – well, not to begin, but to keep us busy for another, surprisingly long time. It was more than just a little challenge to get it on board. But a sailing ship has winches here and there. Pulling a sea monster out of the water is different from setting sails, though. Ask Captain Maarten about it! Finally, and it was not the first attempt, the boom with the net swang over the rail and it was lowered on deck under a lot of cheerful shouting.

I have to admit that I was more than just a little bit tired. Dinner did somehow not happen that evening, at least concerning a small group of us who had just kept working. Maybe we just thought we’d finish this quickly (what a silly thought!), I don’t remember. And then I had made the mistake to quickly jump into the Zodiac without a jacket to help the net out of the water at sea level, fixing ropes and so on, while everybody was busy pulling ropes on deck. Big mistake! Of course nothing happens quickly. It was f($!$#ng cold!

It was such a great moment to see the net on deck and to know that our lovely chef Sascha was just about to get an extra portion of that great Dutch bread dinner ready. The best midnight dinner I have ever had! Of course I was not the only one who was cold and tired. 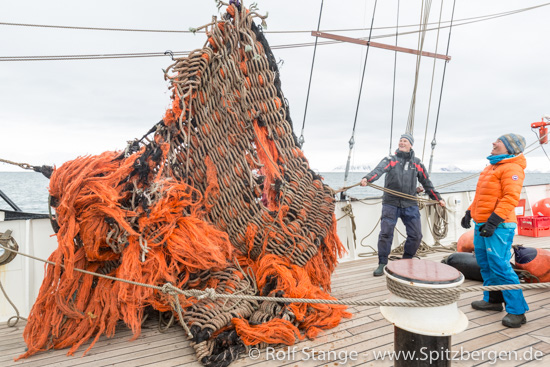 So that is the story of the sea monster from Woodfjord. End of story.

P.S. You are curious about how to reduce the use of plastics in daily life? Visit lessplastic!