Today (Monday, 10 September), a polar bear family was seen near Vestpynten, not far from the airport and campsite at Longyearbyen. It was a female bear with two first-year cubs, probably the same polar bears that were seen on Saturday at Revneset, on the north side of Adventfjord opposite of Longyearbyen. On Saturday, the bears were chased away by helicopter towards Sassenfjord, away rom Longyearbyen.

Polar bears including females with cubs regularly cover large distances. A walk including longer swimming distances from Adventfjord (Longyearbyen) to Sassenfjord and back within 2 days is fully realistic and normal.

When the bears were seen near Vestpynten today around 16.00, both curious onlookers and the Sysselmannen (police) were soon on the scene, as reported by Svalbardposten. The Sysselmannen followed the polar bear family by car slowly towards Bjørndalen further west.

There, hopes that the bears might continue and disappear from the Longyearbyen area soon vanished in the haze, as the bears were seen feeding on a large whale carcass, possibly from a sperm whale as appears on a photo taken by the Sysselmannen. This might provide the bears in question with food for a longer period, if the whale does not start to float and drift away again. Chances are also that the whale carcass attracts further bears.

The Sysselmannen asks the public not to get close to the bears and to be alert and to exercise usual safety measures at any time in the field. 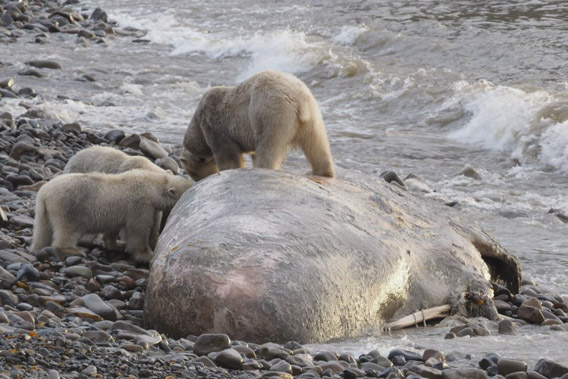