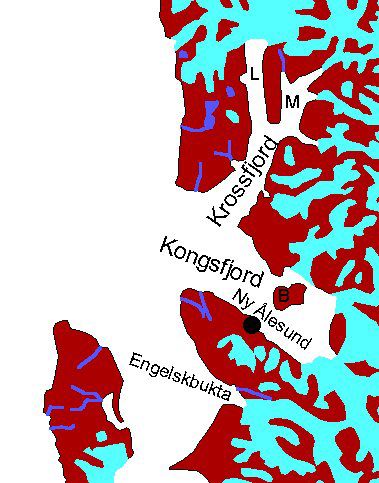 General: Fjord area with beautiful and varied landscape and a long history. Especially the scientific settlement Ny Ålesund attracts more and more visitors each year, including large cruise ships, which is not always very convenient for the working scientists. The gulf stream keeps the climate relatively mild (for regional standards at least) and the fjord open for most of the year. Parts of the are within the Northwest Spitsbergen National Park and thus protected. The smaller islands in the Kongsfjord and Kap Guissez between Kongs- and Krossfjord are Bird sanctuaries, entry or approach closer than 300 metres are prohibited during the breeding season (15th May to 15th August). 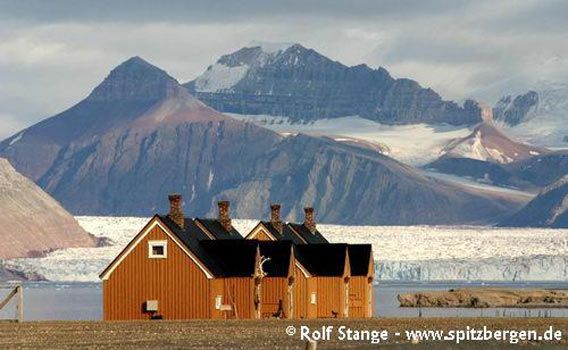 Houses in Ny Ålesund in front of the impressive mountain- and glacier-scenery of the inner Kongsfjord.

Geology: Varied. Mostly basement rocks. Around the Krossfjord prediminantly Phyllites and mica schist, which were deformed strongly both during the Caledonian orogeny (Silurian) and the Alpidic orogeny (here lower Tertiary), when large sheets were overthrusted. Kongsfjord is quite comlpicated. On the northern side, there are weakly metamorphosed carbonates (‘marble’) of the basement, for example on Blomstrandhalvøya, where optimists once started mining (see below). In the innermost Kongsfjord, there are a lot of Devonian and Permokarboniferous sediments exposed, which have also been strongly deformed during the lower Tertiary, but not metamorphosed. This mosaic of brownish-red Devonian sandstones and conglomerates (‘Old Red’) and yellowish-brown, younger carbonates and clastics, which lie directly next to and on top of each other and the basement, is very attractive. In the innermost Kongsfjord, you can see rocks from the basement and well into the upper Palaeozoic, with beautiful fold- and fault patterns. Enjoy! 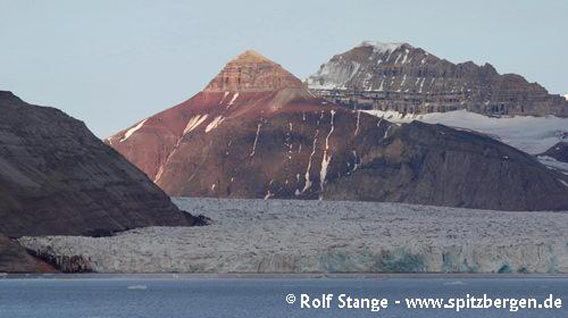 Geological mosaic east of Kongsfjord. The reddish Old Red with a steep cap of hard permo-carboniferous carbonates are quite prominent.

Brøggerhalvøya (Brøgger peninsula) between Kongsfjord and Engelskbukta is also a geological mosaic of basement rocks, Permocarboniferous and lower Tertiary sediments with conglomerates, sandstones and coal seams, the latter ones being the foundation of mining activities near Ny Ålesund, which were abandoned in 1962. The coal was mined well below sea level, the mine was a good kilometre southeast of the settlement.

Landscape: Very varied because of the geological mosaic. Mountaineous, ice-free lowland is limited and mostly confined to Brøggerhalvøya between Kongsfjord and Engelskbukta. The interiour is strongly glaciated, and several large glacier fronts calv into Lilliehöökfjord and Kongsfjord. Well-known mountains are the Tre Kroner (Three crowns), three striking mountains east of the Kongsfjord: Svea, Dana and Nora (Sweden, Denmark, Norway). 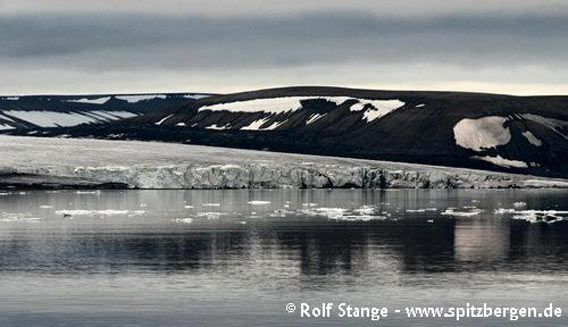 Calving glacier front in the Krossfjord.

Flora and Fauna: Rich tundra vegetation, where the topography allows this. Locally very rich vegetation below bird cliffs with high biodiversity. Because of the relatively favourable climate can flowers become comparatively large. The bird fauna is also quite rich, with a number of seabird colonies on the steep cliffs with Brunich’s Guillemots, Kittywakes, Glaucous gulls, and very rarely even the Razorbill, which you won’t fine elsewhere in Svalbard. Another ornithological highlight is the Long-tailed Skua which has its only breeding site in the Kongsfjord. The tundra areas are important feeding sites for geese, mostly Barnacle geese. The islands are home to large numbers of Common Eider ducks. Reindeer and fox roam over the tundra. Even the settlement Ny Ålesund has a good number of species to offer, including Arctic terns which are likely to attack you (just leave them alone, never try to hit them!), possibly Arctic fox, geese, Long-tailed duck and maybe even the Ivory gull near the dogyard. 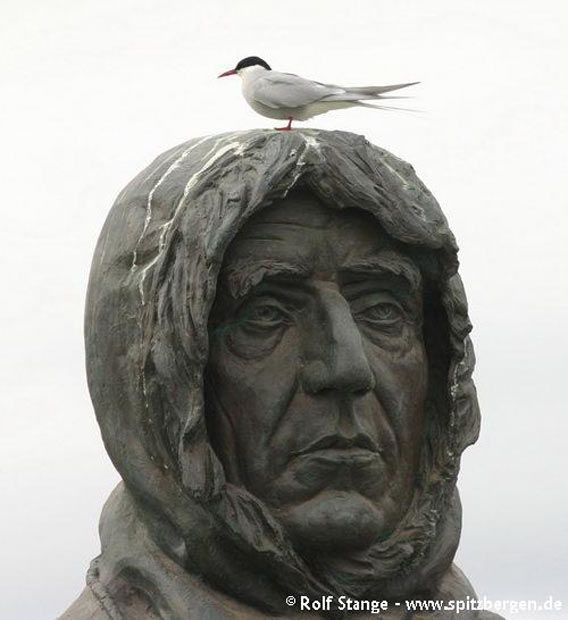 Mister Amundsen in Ny Ålesund using an Arctic tern to cover his head.

History: Already the whalers in the 17th century knew the Kongsfjord, and there are graves and remains of blubber ovns at least in Engelsbukta. They also knew that there was coal on the southern side of the Kongsfjord, as they found bits on the beach. But mining didn’t start in the Kongsfjord – or King’s Bay, as it was called back then – until the early 20th century. It never went smooth, only with interruptions and was abandoned in 1962after a series of accidents with casualties, the last ones even leading to a governmental crisis in Norway, as the state was and still is the owner of Kings Bay Kull Kompani, now just ‘Kings Bay’, as there is no ‘kull’ (coal) mining anymore, but Kings Bay is still running the settlement.

The mast from which Amundsen and Nobile launched their airships. 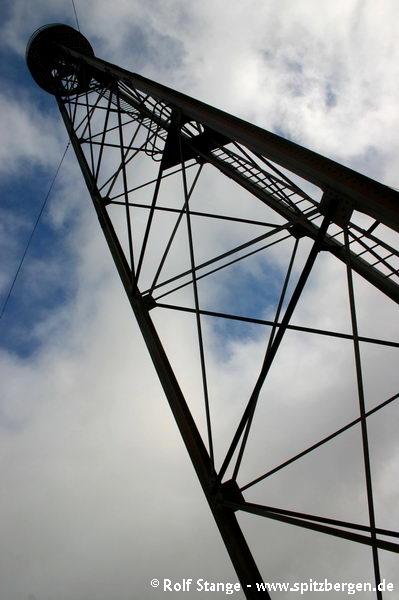 Interesting and typical for the era is the story of Blomstrandhalvøya. The English Northern Exploration Company established here a mine to extract marble, the quality of which was drastically overestimated, though. After a few years of trial mining, everything was abandoned, first loads had been shipped and turned out to be worthless. Remains are still visible. 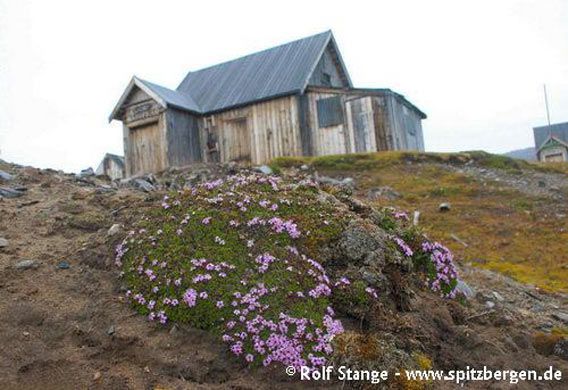 Houses dating back to the days of the marble trial mine on Blomstrandhalvøya (Moss campion in the foreground).

The German Navy ran weather stations in the bay Signehamna in Krossfjord during the second world war (1941/42 »Knospe« and 1942/43 »Nussbaum«). 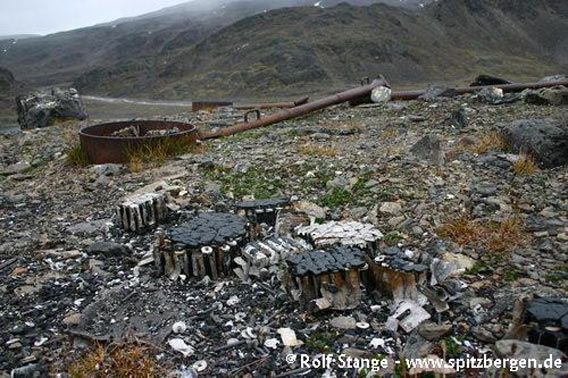 Remains of the German war weather station in Signehamna
(old batteries in the foreground).