Researches are currently working to establish the reservoir capacity of sandstone layers in Adventdalen for carbon dioxide. The equipment used for previous tests has not been strong enough to explore the full potential. Testing is done by pumping water into the layers 970 metres under the surface, starting with a rate of 10 liters/minute and increasing gradually to 500 liters/minute. The results will help to evaluate the question if the layers in question are suitable to store large amounts of carbon dioxide safely. If so, carbon dioxide will be pressed down in liquid state, thus water as testing substance. A 400 meter thick permafrost layer is supposed to keep the liquid gas inside. If testing works according to plan, UNIS scientists plan to continue with further test drillings in 2011.

Adventdalen in summer 2010: the street from Longyearbyen to mine 7 is passing the old northern light observatory and the blue, chimney-like building were test drilling for the CO2 storage site is carried out. 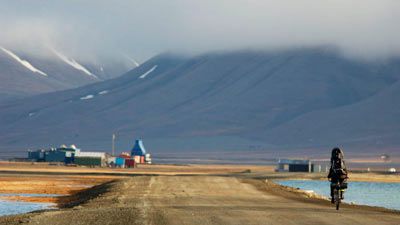