The decreasing pH-value of ocean water or in other words the increasing acidification of the global seas is amongst those consequences of global chance that have, so far, received relatively little public attention, but are a major worry for scientists. The world’s oceans are important CO2 sinks, which means they absorb massive amounts of CO2 from the atmosphere. The more CO2 in the atmosphere, the more will be stored in ocean water, which is accordingly becoming more and more acidic.

It is feared as a consequence that marine creatures, especially those plankton species that use carbonate to build up a shell, will suffer severely. This includes many species from single-celled plankton to marine snails. The one thing that many of them have in common is that they are very important for the marine food web. Should the pH-value of the water fall below thresholds that individual species can tolerate, then links of the food chain may break. The extreme consequence would be a collaps of regional food chains and ecosystems. Also seabird colonies and animals including whales, polar bears and seals depend completely on the marine food chain for their survival. There are significant indications that such fears have to be taken seriously.

But there is now also a scientific observation that the marine ecosystem in Spitsbergen may be more resistant against acidification than assumed so far. In Kongsfjord, scientists have carried out a “mecocosm experiement”: nine installations in the fjord where CO2-enriched seawater was added to the natural environment to study the consequences. The result is surprising: the scientists “found almost no direct effects of OA on microzooplankton composition and diversity …” This gives reason to hope that arctic ecosystems may be more resistant against falling pH-levels of ocean water than believed so far.

There is, however, no certainty yet. The study covers only one fjord over a limited period of time. Observations supporting different results are still there and valid. As always, one of the conclusions is: further research is needed …

Marine snails in Krossfjord: how resistant are they against increasing acidification of their environment? This is one of the 10000000 dollar questions regarding the future of global ecosystems. 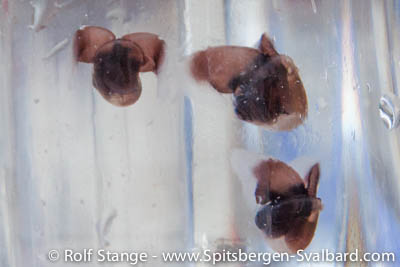