The area of arctic sea ice has been monitored by satellite for 34 years not, but the European satellite Cryosat, operative for 3 years now, is able to measure not only area, but also the thickness of the ice, giving scientists much more precise and reliable data to monitor the development of arctic sea ice. Before Cryosat, data about ice thickness had to be collected manually, giving only control samples with great effort.

2012 remains so far the minimum year for arctic sea ice, both in terms of area and volume. In October 2012, there were about 6,000 cubic kilometres (km3) of sea ice in the Arctic, compared to 9,000 at the same time in 2013. This means an increase of 50 %. Most of the increase is due to an increased thickness of multi-year ice, which is currently mostly two year ice, by 20 % or 30 cm. The proportion of multi year ice is, however, still significantly lower than it used to be.

The interpretation of these data is that 2012 was an extreme negative year, due to persistent strong winds that pushed a lot of sea ice out of the Arctic Ocean and into the North Atlantic, where it melted quickly. There is no indication of a change of the long-term negative trend, and the Arctic is still expected to be ice-free in summer within a few decades – some predictions even talk about a few years only.

In comparison, the sea ice volume of the early 1980s is estimated near 20,000 km3, more than double compared to the present value. 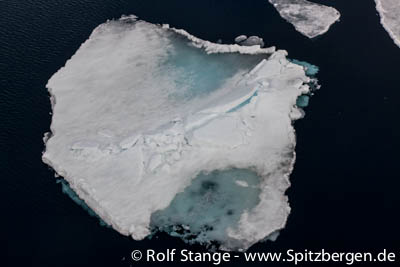