Home → * News and Stories → Spitsbergen’s fjords are freezing over

Spitsbergen’s fjords are freezing over

In recent years, the fjords in Spitsbergen did not have as much of a reliable ice cover as they used to have earlier on. But the current season is developing well: Tempelfjord is frozen and the sailing boat Noorderlicht has taken her position as the “boat in the ice”, already welcoming visitors. Already now, the fast ice in Tempelfjord is wider than in previous years: should it get strong enough, then it would be possible to take a fast and direct route from De Geerdalen to the boat in the ice or even into Billefjord or at least to Gipsdalen, making the winter route to Pyramiden much faster. We will see if this actually happens, but anyway: it is looking good.

After a disappointing fjord ice situation in 2014, which did not even allow Noorderlicht to become frozen in, both locals and tourists are now looking forward to a good winter touring season. Only a few days ago, a heavy storm broke a lot of ice up, but both water and air are cold enough now to turn the broken floes into a continuous ice cover again quite quickly.

Also Grønfjord near Barentsburg and the fjords on the northern side of Isfjord are to a good degree frozen over now. It remains to be seen if Adventfjord near Longyearbyen will freeze over, as it used to in the past. A thin, young ice cover was driven out by the storm on Sunday. 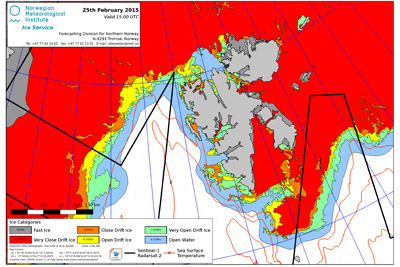 Why not 2 pictures for one entry?

The Noorderlicht as “boat in the ice” with some local visitors.” 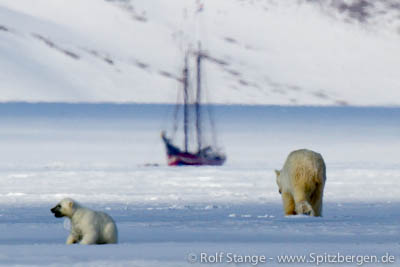