(4th/5th April 2015) After some calm early April days, it is time to get out again when the Easter weekend is approaching. Everybody here who has some means of transportation and possibly even access to one of the nowadays much sought-after huts is absconding from zivilisation, and I am happy to be part of that. It does not have to be far and adventurous. That is one of Longyearbyen’s nice aspects: the arctic wilderness starts as soon as you have passed the last house.

For many here, Bjørndalen is something like a city park in a wider sense. It is easy to get there by car or snow mobile, and there is a number of huts in local ownership near the Isfjord coast. This is where I spend this lovely weekend. All inclusive! Scenic views of the wide Isfjord, good food in good company, and small things are searched for by those who still believe in the Easter bunny, hidden by those who know better. At least in this case.

There is no Easter bunny in Bjørndalen, but Arctic fox and ptarmigan are at home there. I will have to spend some more time here, soon.

Permaculture: vegetables, fresh and tasty from the arctic

Modern life in the arctic is demanding considerable resources. Food stuffs are imported over long distances, which is costly and burns a lot of fuel. Many visitors get a bit nervous when they see the prices for food in the high north, and so-called fresh vegetables are not always as fresh as you might want.

Food waste is shredded and washed straight into the fjord together with waste water, altogether a great waste. Another solution would be highly desirable, both from an environmental and an economic perspective.

Thinking local food in the arctic, most people would probably have reindeer steaks on their mind, which is obviously not the solution. Local vegetables? Negative. Even the Russian (Sovjet, back then) settlements Barentsburg and Pyramiden were, in a way, more advanced, with considerable local production in greenhouses and stables for cows, pigs etc., most of which have been abandoned years ago.

But creative people are working on solutions to grow vegetables locally, fresh and environmentally friendly. A start up project called Polar Permaculture Solutions is developing techniques in Longyearbyen for advanced greenhouses to grow vegetables in permafrost areas without high energy and water consumption. First tests are promising: according to Polar Permafrost Solutions, parsley, coriander, basil, paprika, summer squash, mini corn, onions, lettuce, tomatoes, eggplant, red chili peppers and more have already been grown successfully. Food waste is used to produce soil and fertilizer with biological techniques (sounds better than worms, but that’s what it is)

Fresh, tasty, local production and environmentally friendly – we are looking forward to see the further development!

Fresh vegetables of local production in Longyearbyen: so far an utopia, hopefully soon a reality that makes a lot of sense for the environment and economy. 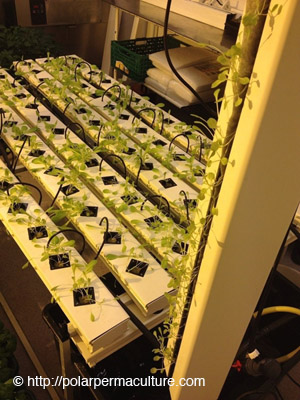 Lower extent of winter sea ice in the Arctic

During this winter season 2014/2015 the sea ice in the Arctic has extended much less than it usually did.

As the U.S. National Snow and Ice Data Center at the University of Colorado reports, this winter the ice likely reached its maximum extend as soon as February 25th. This is 15 days earlier than the average of the years 1981 to 2010 which serves as the reference period.

More alarming is the fact that the extent of sea ice on this date had not proceeded very far yet. Indeed, since the beginning of the satellite record the maximum extent of Arctic sea ice has never been as low as in this winter. On February 25th the ice covered an area of 14.54 million square kilometers. This is 1.1 million square kilometers less than the long term average and 130.000 square kilometers less than the former negative record of 2011. All areas were affected except for the Labrador Sea and the Davis Strait between Greenland and Canada. There was a remarkably low extent of ice on the Pacific side of the Arctic and in the Barents Sea west of Novaya Semlya and southwest of Spitsbergen.

After reaching its low maximum on February 25th the sea ice extent initially decreased significantly (with regional variations) and then increased again in the second half of March. However, a new maximum could not be reached. Currently the ice is retreating again, according to the time of the year.

It can be expected that the low extent of sea ice in winter will also lead to less ice in the summer season. This scenario is supported by the effect that open water surfaces are absorbing more solar energy and are warming up faster than ice surfaces which reflect most of the sunlight (see also Spitsbergen-Svalbard.com news: Retreat of Arctic sea ice accelerates global warming from February 2014). 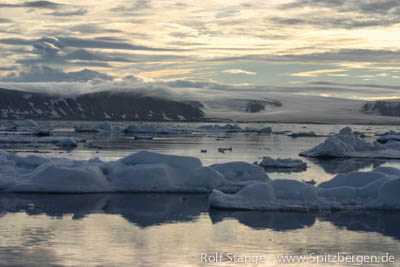