More houses in Longyearbyen have been evacuated last night as a precautionary measure. Yesterday, the houses closest to Sukkertoppen, the mountain from which the avalanche came, had been evacuated. Later, all inhabitants of houses between the mountain and Hilmar Rekstens Vei (the road behind (=east of) Svalbardbutikken) had to leave the area. Altogether, about 180 people had to leave their homes until further notice. The area is closed, the people do not have the opportunity to go to their homes to get some personal items. The supermarket (Svalbardbutikken) and other relevant places have opened to give those concerned the opportunity to get important items. Locals who have already left for Christmas holidays have offered their flats, others have invited people into their homes with them. Readiness to help others in need is generally great.

The snow avalanche that had destroyed 10 of the so-called Spisshusene on the eastern edge of Longyearbyen took one human life, a local Norwegian man in his 40s. Several persons are injured. Some of these, including 2 children, were flown to Tromsø yesterday.

No further persons are declared missing, but the avalanche area continues to be searched today to be on the safe side.

An overview of the parts of Longyearbyen which are concerned: the blue circle indicates the source area of the avalanche, the red circle the area that has mainly suffered damage. The areas in the orange circles have been evacuated. 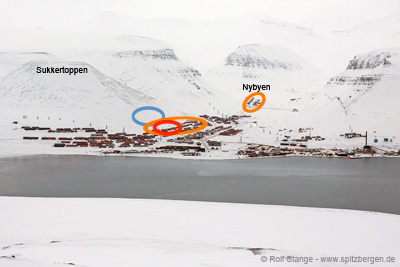