There was an earthquake yesterday (Tuesday, 29th March) in Spitsbergen that was clearly felt in Longyearbyen. At 1231 hours, houses were shaken and a loud rumble was heard and felt. Some thought of an avalanche or a small avalanche from the roof of their house. In some cases, furniture moved up to 30 cm and plates were chattering in shelves and on tables.

Many people were initially afraid, which is understandable considering that Longyearbyen has felt the destructive powers of nature quite recently during the avalanche before Christmas. People in the administration building (Næringsbygget), opposite the post office, spontaneously decided to evacuate for some minutes. The earthquake was also clearly felt in Barentsburg. No damage occurred anywhere as far as known.

The epicentre is in Storfjord, west of Edgeøya. The hypocentre (epicentre with fixed vertical position) is assumed to be at 10 km depth. The earthquake reached 5.3 on Richter’s scale, making it strong enough to potentially cause damage, but far from the destructive force that turns cities into ashes or causes Tsunamis elsewhere in the world.

There are active faults (large cracks in the crust) in Storfjord which are frequently causing earthquakes. Recent ones were noticed in 2008, 2009, 2010 and 2014, the strongest one being the one from February 2008, which reached a remarkable 6.2 on Richter’s scale. In addition comes a large number of earthquakes that is recorded by seismic instruments, but not noticed in public.

This is what the earthquake on Tuesday looked like. (Seriously: this is of course a fake image, composed of several frames taken out of one photo.) 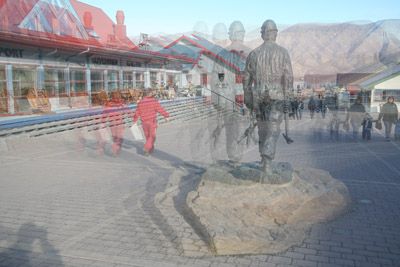