This year’s Easter brainteaser brought a surprising and interesting result – none of the answers was right. Maybe I have underestimated the difficulty of the question? It looks like it. Even several seasoned colleagues who should have been there 10 times or more have not recognized the place.

This is even more surprising as the photo does not show an unknown bay, but one of Spitsbergen’s most famous places: Virgohamna on Danskøya. It was Virgohamna where the Swede Salomon August Andrée started his tragic North Pole voyage in 1897, followed by the American Walter Wellman, who started at the same place in 1906, 1907 and 1909, not getting anywhere near the pole either, but with an outcome less tragic.

Because of the history and the Harbour seals that can sometimes be seen there, Virgohamna is a popular place to visit still today. Already the above-mentioned expeditions attracted curious tourists, who came on ships that were anchoring in Virgohamna, just staying and waiting for the expeditions to take off. The old photo must have been taken on one of these occasions.

Still … no right answer. The answers sent in are suggesting Spitsbergen’s real coal harbours: Barentsburg, Colesbukta, Adventfjord, Pyramiden. This is certainly due to the misleading caption. Virgohamna does not have anything with a coal harbour to do, there is no coal anywhere in that area. The newspaper redaction which used the photo did probably not have a more appropriate one, so they used Virgohamna, guessing nobody would know the difference. They were obviously right! This is, of course, mean 🙁 but the landscape features are characteristic, and those who have been there should have had a fair chance 😉 or not? The view shown in the lower, recent image is seen every year by hundreds.

As there is no right answer, but an Easter brainteaser without a winner would be a rather sad affair, a winner was drawn by lot. The price goes to Tommy H. in the Netherlands – congratulations! Tommy will be contacted.

Where is that? The answer: Virgohamna! 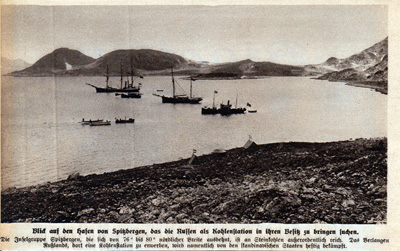 A similar view of Virgohamna on a grey summer day in 2015 (looking east from the western end of the bay). 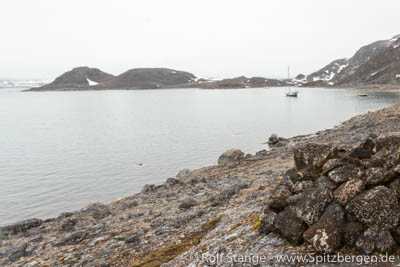