According to the weather forecast, today should have been our day for a landing on Moffen. Little wind and hopefully calm seas. So we left Mushamna in the morning with high spirits and soon we set sails – this in itself should have made us suspicious, and actually, it did – and course for Moffen. Soon, the wind and sea picked up, and quickly it became clear that Moffen was not a place to be today. So we turned to the west, Raudfjord or so. Meanwhile, the wind had picked up, force 7 to 8, 9 in gusts, and the waves were quite impressive. Real sailing, which many enjoyed on deck, but it has to be said that not everybody enjoyed it. 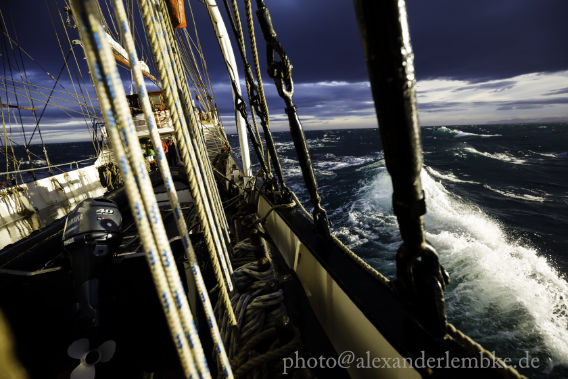 The sea was boiling white in Breibogen, no chance for a sheltered anchorage. We found shelter later in the afternoon in Svenskegattet. The wind continued to blow, with heavy gusts, so we enjoyed a relaxed day on board, with presentations and a film and of course the cinema outside, with the impressive display of nature’s powers.