Home → * News and Stories → Avoid disturbance in sensitive tundra areas such as Midterhuken!

Avoid disturbance in sensitive tundra areas such as Midterhuken!

The summerseason has begun in Spitsbergen. After a relatively early snow melt, ships have arrived to take tourists into remote areas, and birds have returned to start their breeding season.

The early summer is a very busy time in the Arctic for all kinds of creatures, animals and humans alike. Both birdcliffs and the tundra are humming with life, thousands of geese are now building up reserves after the spring migration to get ready for breeding, eider ducks and many other birds, tundra- and cliff breeders, to just about the same.

The Sysselmannen (governor) reminds everybody to exercise great care when travelling in the field. That is important at any time, but especially so in the early summer when many birds are breeding. A number of especially sensitive sites are protected as bird sanctuaries, but birds are also resting and nesting in many other areas, making them prone to disturbance during the breeding season. 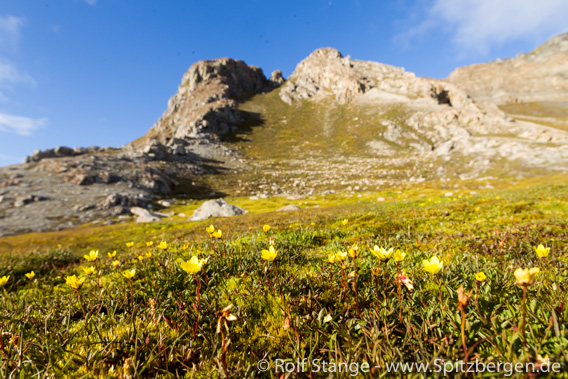 Tundra at Midterhuken: should be left alone in the early summer.

The Sysselmannen explicitly asks everybody to avoid traffic (not to land, that is) at Midterhuken/Gåsbergkilen in Bellsund. Also other sensitive places should either be avoided or visited only with great care to avoid disturbing geese, ducks and other birds living and breeding in the tundra or on cliffs.