A polar bear broke into a building on Kapp Linné/Isfjord Radio.

The old radio station provided radiocommunication between the settlements of Spitsbergen and the Norwegian mainland. It was disused when a glass fibre cable was laid to enable much faster traffic of much bigger volumes of data. Since the late 1990s, Kapp Linné is used as a little wildnerness hotel on the west coast of Spitsbergen.

Currently there are 5 staff and 9 guests at Kapp Linné. Sunday morning around 7 a.m., the manager, Malin Stark, saw that a door was broken in, soon thereafter, she heard suspicious noises from a storage room, as Svalbardposten reports.

Around 9 a.m., the polar bear was still inside the building. Sysselmannen and Norwegian Polar Institute have personell en route to Kapp Linné to scare the bear away or to tranquilize him. Shooting the bear is the worst case scenario, which the specialists will want to avoide if possible by any means. 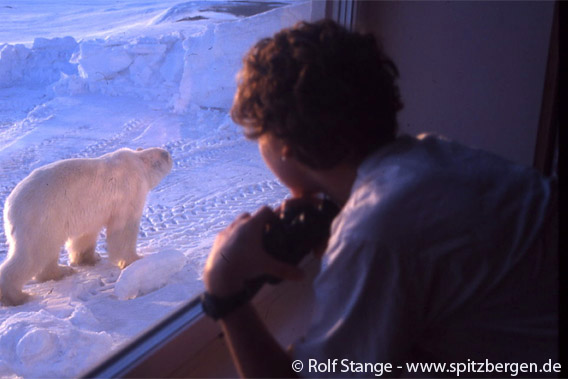 Persons were, as far as known, not in immediate danger. It is, however, possible, that the bear is under stress; it may be injured or maybe it does not find the way out again. The polar bear is assumed to be a large male.

Polar bear visits on Kapp Linné are not an everyday event, but they do occur more or less regularly. This author, who spent a winter/spring season working on Kapp Linné when he was still very young, was also able to make such experience. But a bear inside one of the buildings is definitely a rare event.

Addendum: Sunday morning near 11 a.m. the Sysselmannen informed that the polar bear had left Kapp Linné and is on the way northwards.