Salvaging the shrimp trawler Northguider, which ran aground in Hinlopenstretet in December last year, has turned out to be more difficult than thought before, as the Norwegian coastal adminstration authority Kystverket reports in a press release. The hull is more severely damaged than expected which makes the operation according to the initial plan impossible.

Northguider ran aground in late December 2018 at Sparreneset south of Murchisonfjord. The ship owner is required to remove the wreck within 2019, but this is now becoming doubtful: the polar night is soon to start, the sun will not rise above the horizon anymore for 4 months from late October. Shipping is not impossible during the dark season, but if a complicated salvaging operation can be carried out safely and successfully without daylight is an entirely different question. 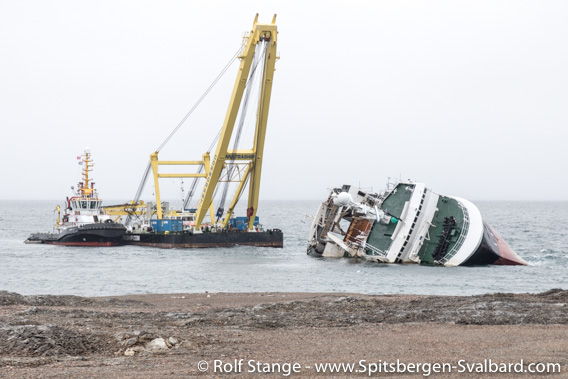 The salvaging vessels arrived on location only rather late in the summer, and then the operation was delayed repeatedly by severe ice and weather conditions. Only recently the wreck could be turned into an upright position and then it became appearent that damages on Northguider’s hull are far more extensive than expected. An area of 12×5 metres is said to be impacted.

Now all the players involved, including the coast guard, Kystverket, the ship owner Opilio AS, the insurance company and the salvaging company SMIT Salvage have to come up with a new plan. It appears rather unlikely that this will all happen within 2019. Officials have already mentioned postponing the operation until 2020 as an option. But if Northguider will still be there in the summer of 2020, after months on end with ice and severe weather, and in a condition that allows removing the wreck, will remain an open question until then.