The salvaging operation of the shrimp trawler Northguider, that ran aground at Sparreneset in Hinlopenstretet in Svalbard in the end of December 2019, turned out to be more difficult than expected, as reported recently. Now it has been decided that further operations are postponed until 2020, according to a press release from Kystverket, the Norwegian coastal and maritime authority.

Due to the new information about the hull being more strongly damaged than thought before, new planning is needed and probably new technology, while the polar night is about to start in these latitudes. 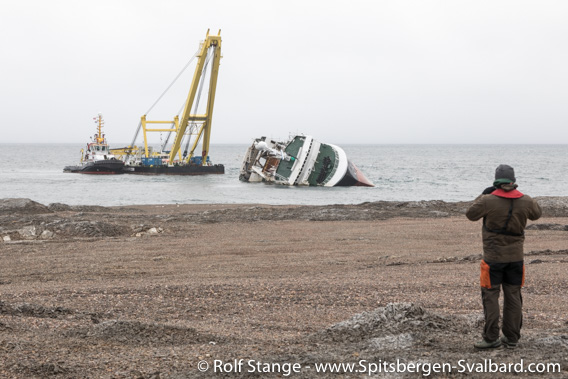 In other words: nothing will happen with the wreck of the Northguider, which is still sitting on rocks just off the shore of Nordaustland, before the summer of 2020 – or, rather, nothing other than what the forces of nature, ice and weather, will do with the wreck. If there is then anything left to be salvaged in 2020 is something that only time can tell.