It is no news that polar bears are opportunistic feeders, taking almost anything they can get down into the stomach. Recent observations point towards a possibly increased tendency to visit Barnacle goose colonies on small islands on the west coast of Spitsbergen in the early summer, when the nests are easy prey. According to Dutch biologist Jouke Prop, in the 1970s bears visited this area only by chance when they came with drifting ice in late May or early June, without paying too much attention to breeding geese. In the 1980s, no bears were observed at all, while bear have visited the colonies frequently in recent years. Interestingly, they tend to come in late June, when there is no ice in the area, but something in the nests to feed on. — Coincidence or newly developed behaviour? Unknown so far.

In any case, after a total of 4 (!) bear visits within a few days, breeding success of the Barnacle geese was reduced to something in the area of 1 %. 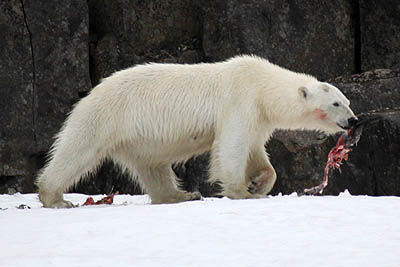