The Sysselmannen’s field inspectors have visited 85 ships and boats during the 2011 summer season, mainly on the west coast, but also in more remote regions including Hinlopen. Permits, ship papers and waste management routines are amongst what the field inspectors check routinely. Additionally, presence of authorities is shown to all visitors, who are encouraged to comply with relevant laws and regulations and to move carefully in the Spitsbergen environment. Controls also include camps and research activities.

The inspectors were in touch with 2403 persons and had only two complaints: one group had established their camp in in Grumantbyen (cultural heritage and accordingly protected). Another group had cut drainage trenches around their tents and left them at departure. The operator was requested to conduct a clean-up of the site. 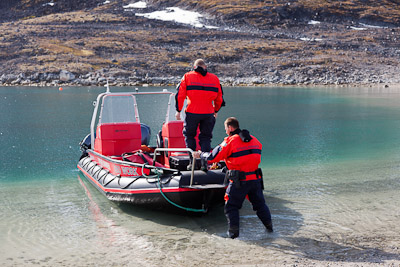