The IMO (International Maritime Organization) is an agency of the UN to produce a legal framework that controls maritime activity globally. Work on a polar code has started years ago to ensure safety of shipping in polar waters. Aspects of the polar code touch various fields such as the construction of ships, safety equipment and qualifications of Captains and nautical officers, to mention a few. The environment is an important major focus.

The matter is complex and partly controversial. A decision will not be made in 2012 as originally scheduled, but is now expected for late 2014. The slow process is critizised by environmental organiszations. The pronounced increase of ship traffic especially of cargo ships and oil tankers in certain areas such as the northwest and northeast passage (Canada/Alaska, Russia) gives indeed reason for environmental concerns. On the other hand, national governments can already implement important legislation in many areas. The Norwegian has introduced an environmentally important ban on heavy oil in Spitsbergen in recent years. A similar ban is in force in Antarctica since August 2011.

Part of the discussion is a general ban on all ships that are older than a certain year such as 1996. If such a drastic step, which would have drastic consequences for many ships, would be equally beneficial for safety and environment, is in many cases controversial. In the past, smaller ice-going vessels were often built very strongly. It would mostly be difficult or impossible to replace such vessels adequately.

The complexity of the whole matter is increased by the fact that it concerns huge areas with a wide diversity of all kinds of conditions. The west coast of Spitsbergen, for example, is ice-free for most of the year and usually easily accessible for all kinds of ships. The use of icebreakers in this area, which is small but has a lot of local traffic, would be a great and environmentally contraproductive waste of fuel and resources. The near-by northeastern corner of Greenland is in contrast one of the areas with the most severe ice conditions on the planet even in summer and can only be reached with heavy icebreakers. Similar regional differences exist in Antarctica, as is made clear by the comparison between the ice-free northwestern area of the Antarctic Peninsula with the ice-covered central Weddell and Ross Seas.

The Swedish icebreaker Oden at the west coast of Spitsbergen (June 2008, with the 3 heirs to the Scandinavian thrones on board).

The small Swedish ship Stockholm, here at the north coast of Spitsbergen, was built in 1953 and is thus one of the oldest ships that is regularly sailing in these waters, but also one of the most robust ones. 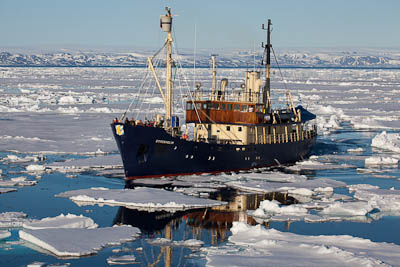