So far it has been assumed that the species polar bear (Ursus maritimus) has a rather recent origin in the upper Pleistocene, maybe 100.000 or maximum 200.000 years ago. This would indicate a very close relationship to brown bears and a quick adaption to the high arctic environment.

A study recently published in Science has now indicated a much older origin for the species. The authors suggest an evolutionary age of approximately 600.000 years (confidence intervall 338.000 to 934.000 years, mid- to lower Pleistocene). Older studies are supposed to be misled by genetical contamination from cross-breeding, an error source believed to be avoided in the new study.

Polar bears as a species have accordingly had significantly more time to adapt from the sub-arctic habitat of brown bears to the high arctic. If this has any implications for the adaptation time of polar bears to recent changes in environment and climate remains an unanswered question at the time being.

Small polar bear family in Spitsbergen. Their ancestors were already roaming through the ice in mid-Pleistocene times. 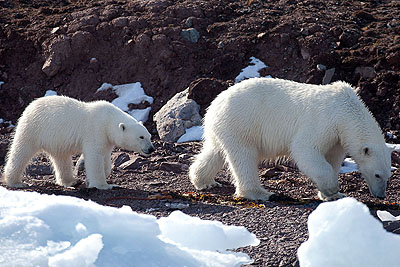